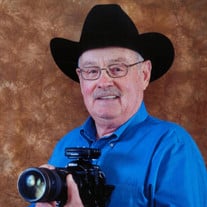 Howard Sears, 85, of Ankeny, passed away Saturday, February 12, 2022, at MercyOne Medical Center in Des Moines, IA. Howard Glen Sears, son of Glen R. and Mildred Jones Sears, was born October 4, 1936, in Oskaloosa, Iowa. He attended Fairview Country School and was a 1955 graduate of Oskaloosa High School. He continued his education at Iowa State University in Ames for one year. On November 11, 1957, he was united in marriage to Nancy Lee in Fremont, Iowa. They had three children and later divorced. Howard was employed in feed sales before 27 years with RayDot, Inc. in Cokato, MN, retiring in April 2001. On December 15, 1990, he married Janice Ruth Utterback in Des Moines, Iowa. They made their home in Leon for 16 years and moved to Ankeny in 2012. He was a member of the Cornerstone Baptist Church in Ankeny and became a deacon in 2018. He was also a member of five Rodeo Associations, Texas Long Horn Breeders Association of America, and the Jaycees. Howard enjoyed showing Texas Longhorn cattle, rodeo photography for 34 years, and fast-pitch softball for 21 years. His family includes two daughters and their husbands: Carol & Kevin Clemen of Amana, IA and Donna & Gary Featherston of Doniphan, MO; one son and his wife, Ron & Tina Sears of Mansfield, TX; eight grandchildren: Jenn Dowell, Missy (Martin) Ballard, Travis (Emma) Clemen, Holly Bruce, Camille (Devin) Donnell, Brittany (Sam) Estes, Shawnda (Brent) Jones, and Stephanie (Jason) Park and 23 great-grandchildren. He is also survived by an uncle and aunt, Bob and Violet Jones of Oskaloosa, In addition to his parents and his wife, Jan Utterback, Howard was preceded in death by his grandparents, Tom and Hazel Jones, who were the ones who actually raised him; a sister and brother-in-law, Betty and Jim Flom, and an uncle and aunts, Tom and Barbara Jones, Myrtle Martin, and Elsie Jones. Funeral Services for Howard will be held at 10:30 a.m., Friday, February 18, 2022, at Cornerstone Baptist Church in Ankeny, Iowa, with Pastor Evan Johnson officiating. The burial will be in Forest Cemetery, Oskaloosa, IA. Visitation will begin at 3 p.m., Thursday, at Cornerstone Baptist Church; the family will greet visitors from 4-6 p.m. Memorial contributions can be made to Cornerstone Baptist Church. Langkamp Funeral Chapel & Crematory in Oskaloosa is handling Howard’s final arrangements.

The family of Howard Sears created this Life Tributes page to make it easy to share your memories.

Send flowers to the Sears family.