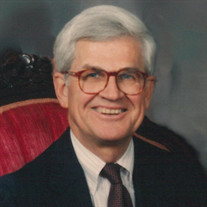 Hugh Vernon Faulkner, 89, of Oskaloosa, IA passed away Saturday, November 4, 2017, of congestive heart failure at the Mahaska Health Partnership Hospice Serenity House in Oskaloosa. Hugh was born on a farm near New Sharon in Mahaska County, Iowa, on February 28, 1928. His parents were Clifford and Lela Lundy Faulkner. He attended grade school through high school at Lacey Consolidated School, and he graduated in 1945. He attended Central College for one year, and then when he turned 18, he enlisted in the U.S. Army. He was stationed for basic training at Fort Dix, New Jersey, which was his first time traveling and living outside of Iowa. He was then sent to Japan for occupation duty on the island of Kyushu, embarking from San Francisco on a freighter along with hundreds of other soldiers. He served in the 19th Infantry Regiment, a Regimental Intelligence Office that was a part of the 24th Division of the U.S. 8th Army. When he returned from service, he attended Central College, where he played baseball for two years in what was then the Iowa Conference, and then transferred to the University of Iowa. He received his Bachelor of Science Degree from the University of Iowa in 1951, becoming the first member of his family to graduate from college. He first worked for GM Finance and Banker’s Trust after college, and then he managed a team of salesman for Proctor & Gamble. His job with Proctor & Gamble took him to nearly every state in the U.S., and he enjoyed telling stories about all the things he experienced on the road in an era when gas stations and hotels didn’t dot the highways as they do now. During that time, he decided he wanted to work for the FBI, so he started law school at the University of Iowa in 1954. He was always known as a tireless worker, and he worked his way through law school by waiting tables and working the night shift at the University of Iowa’s psychiatric hospital. He graduated from the University of Iowa Law School with a Juris Doctor Degree in 1957 and then began working for the Attorney General of the State of Iowa as an Assistant Attorney General. He represented various agencies and departments in the State House in Des Moines for two years and then began working for the Attorney General in the Iowa Department of Transportation, which involved condemnation of real estate for highway purposes, including right-of-way for the Interstate Highway Systems. While in Des Moines, he also argued many criminal cases before the Iowa Supreme Court. On June 21, 1958, he married Everil Lillian Minard at the First Christian Church in Des Moines, Iowa, and they soon moved to Oskaloosa, Iowa, where he joined the law firm of Bray & McCoy in 1961 and became a partner in 1962 (the firm later became McCoy, Faulkner, & Broerman). He was appointed Mahaska County Attorney to fill a vacancy in 1961 and then elected two times afterward, serving as County Attorney from 1969 through 1975. He loved practicing law, scarcely missing a day of work until health issues forced him to retire in late 2016. He was a member of the Iowa State Bar Association and a member of the Mahaska County Bar Association. He served on various boards and organizations, including what was then the Mahaska County Hospital, Oskaloosa Chamber of Commerce, and various capacities at the First Christian Church in Oskaloosa. He was also a lifelong member of the Rotary Club in Oskaloosa. He was an avid sports fan, especially of his beloved Iowa Hawkeyes, and enjoyed playing tennis and watching his grandchildren compete in various sports. He loved telling stories and talking politics with his friends over coffee at various spots in Oskaloosa. He was especially proud when R.W. Apple of The New York Times featured him and his friends in an article during the 1988 presidential election. He traveled widely with his wife and children over the years, and as much as he enjoyed experiencing new cultures and trying new cuisines, he also enjoyed perusing clothing stores for a new sweater or tie. He had an eye for style and was rarely seen not wearing a fine suit. He leaves behind his wife, Everil Minard, and three children: Hugh Faulkner, Jr. and his partner David Seaman, of Los Angeles, CA; Grant Faulkner and his wife Heather Mackey of Berkeley, CA; and Sarah Faulkner Paglione and her husband Bob Paglione of Wellesley, MA. He’s survived by five grandchildren: Katherine, Elizabeth, and Robert Paglione of Wellesley, MA; and Jules and Simone Faulkner of Berkeley, CA. His brother Glen Faulkner and sister Betty Groves recently passed, but his brother Jerry Faulkner resides in Naples, Florida. He also leaves behind several cousins and many nieces and nephews. Funeral Services for Hugh will be held at 10:30 a.m., Wednesday, November 8, 2017, at the First Christian Church in Oskaloosa with Rev. Goodrich officiating. Military Honors will be provided by the Oskaloosa Honor Guard. Burial will be at Forest Cemetery. Visitation will begin at 11 a.m., Tuesday at Langkamp Funeral Chapel & Crematory; the family will be at the funeral chapel Tuesday evening from 5-7 p.m., to greet visitors. In lieu of flowers, memorials may be made to The First Christian Church or Forest Cemetery.

The family of Hugh V. Faulkner created this Life Tributes page to make it easy to share your memories.

Send flowers to the Faulkner family.