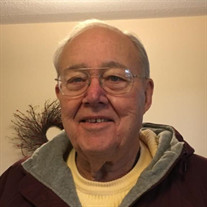 Ike Groves, 81, of Oskaloosa, passed away Thursday, November 19, 2020, at Mahaska Hospital in Oskaloosa. Dwight Leon “Ike” Groves was born May 30, 1939, at home in Union Township, Mahaska County, Iowa, to John A. and Arlean (McMains) Groves. He attended Kaiser Country School northeast of Union Mills and graduated from Oskaloosa High School in 1957. His mother passed away when he was two years old, and he was raised at home by his older sisters and brother. He remained close to his siblings and their families his entire life. His father remarried, and the family moved to Oskaloosa, where Ike excelled in several sports, including football and basketball. After graduation, Ike joined his brother, Buck, in the construction business. In 1962, he married Treva Catherman, to which two sons, Johnny and Russell, were born. After operating Groves Texaco, he started his restaurant career, where he was owner/operator of several fast-food restaurants in three states, Iowa, Illinois, and Nebraska. After Ike and Treva divorced after 11 years, Ike met Sue White, with whom he happily lived for 30 plus years. During this time, Ike developed deeper friendships with his family, coworkers, and friends. Ike took enjoyment in enriching the lives of his older sibling, taking them on trips, and caring for them in later years. He loved attending sporting events involving his grandchildren and cousins. He also enjoyed outdoor activities like vegetable and flower gardening, fishing for crappies in farm ponds and channel cats in the rivers, and morel mushroom hunting. Ike took great pride in helping people in any way he could and was a generous man with his time and attention. Ike’s family includes his companion, Sue White; his sons: John (Diane) Groves of New Sharon and Drs. Russell (Carol) Groves of Madison, WI; Sue’s children: Andrea (Ed) Slayton of Oceanside, CA and Dustin White of Woodland Park, CO; his grandchildren: Emily Groves of Madison, WI, Luke Groves of New Sharon, and Nick Groves of Madison, WI; Sue’s grandchildren: Josh, Ben, and Ellen Slayton; and a step-brother, Gary Freeman. Ike was preceded in death by his parents, his step-mother, Dorothy, a half-sister, Virginia Woods; sisters: Helen (Mike) Van Zee, and June (Sam) Glendening; and a brother, Buck (Betty) Groves. As was his wish, Ike’s body has been cremated. A celebration of life service will be held at Union Mills Church and the burial of his ashes will be in Union Mills Cemetery at a later date when it is safer to gather. Memorial contributions can be made to the charitable cause of your choice. Langkamp Funeral Chapel & Crematory has been entrusted with Ike’s final arrangements.

The family of Ike Groves created this Life Tributes page to make it easy to share your memories.

Send flowers to the Groves family.