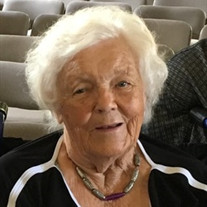 Iona Huff, 88, of Grinnell, IA and formerly of Austin, MN passed away Wednesday, October 11, 2017, at the Mayflower Health Center in Grinnell, Iowa. Iona Mae Huff, daughter of George & Emma Olson Jahr, was born August 29, 1929, in Galena, Illinois. She was a 1947 graduate of Lyle High School in Lyle, Minnesota. Iona was united in marriage to Roger Alan Huff, September 24, 1949, in Lyle, MN. Iona and Roger made their home in Austin, MN, where Roger worked at Hormel Meat Packing Company, and Iona was a homemaker. After her children were older, Iona went to work at the clerk of court’s office at the Mower County Courthouse. In 1980, Roger retired from Hormel, and he and Iona moved to Helena, Montana; there she worked for AAA Storage as an office manager, until her retirement in 1999. Roger passed away June 9, 2006. September 2008, she moved to Oskaloosa, Iowa to be near her children, grandchildren, and great-grandchildren. While in Oskaloosa, she lived in the Shady Lodge Retirement Community and enjoyed its many social activities.   She attended the Assembly of God Church and was active in Bible Study and Prayer Groups. In 2010, she moved to her daughter and son-in-law, Barb and Jack’s home in Lynnville, Iowa and in 2014, she moved to the Mayflower Health Center in Grinnell, Iowa. Her family includes three daughters and their husbands: Barbara and Jack Padgett of Lynnville; Deborah and Lynn Johnson of Austin, MN, and Janet and Steve Dold of Helena, MT; seven grandchildren and their spouses: Jonathan (Julie) Lee, Cory (Sara) Lee, Elizabeth (Nathan) McDanel, Emily Johnson, Benjamin Johnson, Lydia Dold and Joshua (Kellie) Dold; ten great-grandchildren; and dear friends. Besides her parents and her husband, Iona was preceded in death by a daughter, Laurie Huff; a sister, Thelma Nockels and six brothers: Omar, Orvis, Glaydon, Noren, Arthur, and Vernon Jahr. As was her wish, her body has been cremated, and no public services will be held.

The family of Iona Mae Huff created this Life Tributes page to make it easy to share your memories.

Send flowers to the Huff family.