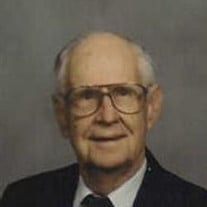 Ivan James Baker: Ivan passed away Tuesday evening, July 13, 2004 at Mahaska Hospital at the age of 93 years, 3 months and 23 days. Ivan's memory is honored by his daughter and son-in-law, Janet & Michael Papian of Windsor Heights, IA and a son, Jerry Baker of What Cheer, IA. He was blessed with three granddaughters and four grandsons and their spouses: Kelly & Doug Tish, Janet & Jon Hurd and Kris & David Giovannini, Ken & Sharon Mercer, Rick & Barb Mercer and Kirk Mercer; nine great grandchildren: Kim, Eric, Nick and Jessica Mercer, Brook Tish, Leanna Kime, and Andrew, Hunter and John Ivan Giovannini; and one great great grandson, Darrick LaMont Carter III. He is survived by one brother & sister-in-law, S. Ward & Jeanne Baker of Bakersfield, CA. Ivan James Baker, son of Arthur Ward and Emma Laura Kitzman Baker was born on March 20, 1911 at home in Indianapolis in Mahaska County, Iowa. He was a 1927 graduate of What Cheer High School. He began his 63 year farming career with his father on the family homestead five miles west of What Cheer. This farm continues to be in the Baker family and was recognized in 1996 as a 150 year farm. In 1975, he moved to a farm located on the Mahaska/Keokuk County Line; he farmed there until 1989, when he retired and moved to Oskaloosa. Ivan married Mildred Junkins in March 1935, she died in 1940. On May 19, 1948 he married Alice Genevieve Lloyd at her home in Union Mills; they were married for 51 years when she passed away on January 10, 2000. Ivan was an 81 year member and Elder Emeritus of the Oskaloosa First Christian Church; he was a member & past president of the Mahaska County Farm Bureau, a past chairman of the Farm Service Board and the County Board of Education, he served as a director on the Prairie Farmers Mutual Board for 52 years, he was a member of the Mahaska County Historical Society and a 50 year member of the Masonic Lodge Universe #242 A.F. & A.M. and is currently with the Webb Lodge #182 in Sigourney. Preceded in death by his parents; his wives, Mildred Junkins and Alice Lloyd; a grandson, Lynn Mercer; and one brother, Melvin Baker. PDF Printable Version

Ivan James Baker: Ivan passed away Tuesday evening, July 13, 2004 at Mahaska Hospital at the age of 93 years, 3 months and 23 days. Ivan's memory is honored by his daughter and son-in-law, Janet & Michael Papian of Windsor Heights, IA and a... View Obituary & Service Information

The family of Ivan James Baker created this Life Tributes page to make it easy to share your memories.

Send flowers to the Baker family.