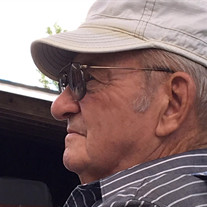 Jack Bowen, 89, of Oskaloosa, passed away Thursday evening, April 28, 2022, at his home surrounded by family. Jack Palmer Bowen, son of Kenneth and Mildred Mason Bowen, was born on August 27, 1932, in Oskaloosa. He was a 1951 graduate of Oskaloosa High School. Jack enlisted in the United States Navy during the Korean War and served from December 7, 1951, to November 17, 1955. During his service, he served as a Seabee, where he helped build and maintain many buildings and mechanical items in the Navy. After returning home, he worked for Edwards and Campbell, building pole barns for five years. He went on to work for Oskaloosa Builders, building houses, and eventually became a subcontractor. After 35 years in the building trades, Jack retired in 1992 after breaking his leg on a job site. Jack married Karen Elaine Walker on June 26, 1976, at Grace Lutheran Church in Oskaloosa. He was a member of the American Legion and the V.F.W. He enjoyed fishing and gardening. Jack’s gardens were admired by many, and he came to be known as the man who did not allow even one weed in his garden. Jack’s family includes his wife, Karen of 45 years; his children: Terri (Randy) Brammer of Blair, NE, Kim (Kenny Behrens) Bowen-Stansbeary of Lebo, KS, Guy Bowen of Prior Lake, MN, Kevin (Gwen) Ashman of Bussey, IA, Leisa (James) Kelderman of Sarasota, FL, and Curtis (Jennifer Graham) Bowen of Roan Mountain, TN; ten grandchildren and ten great-grandchildren; and a sister, Kay (Max) Simpkins of Ankeny, IA. In addition to his parents, Jack was preceded in death by a son, Jeb Bowen; a granddaughter, Lindsey Ashman; a sister, Helen Shaw; and three brothers: Kenneth, Steve, and Tom Bowen. Memorial Services will be held for Jack on Monday, May 9, 2022, at 10:30 am at Langkamp Funeral Chapel and Crematory, with Pastor Molly Goodrich of the First Christian Church officiating. The burial will be in Forest Cemetery with the Oskaloosa Honor Guard conducting Military Honors. As were Jack’s wishes, his body has been cremated. Memorials may be made to Mahaska Health Foundation, Serenity House.

Jack Bowen, 89, of Oskaloosa, passed away Thursday evening, April 28, 2022, at his home surrounded by family. Jack Palmer Bowen, son of Kenneth and Mildred Mason Bowen, was born on August 27, 1932, in Oskaloosa. He was a 1951 graduate of Oskaloosa... View Obituary & Service Information

The family of Jack Bowen created this Life Tributes page to make it easy to share your memories.

Send flowers to the Bowen family.