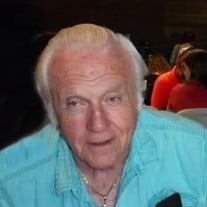 Jack VanSkike, 82, of Oskaloosa, passed away Saturday, June 12, 2021, at the University of Iowa Hospitals in Iowa City, Iowa. Jackie Barnett Van Skike, son of Harry and Reva (Smith) Van Skike, was born June 3, 1939, in Paris, Missouri. He grew up in Holiday, Missouri, where he attended school. Jack enlisted in the Navy at age 16 to help support his family. He served in the Navy for 21 years, and at the time of his discharge, he had earned the rank of E-6 Petty officer and earned his High School Diploma while in the Navy. After his Naval Career, he married Peggy Joyce Dunwoody on June 8, 1977, in Lone Pine, California. Upon his retirement, the family settled in Ridgecrest, CA, and then moved to several other cities before settling in Oskaloosa in 2007. After his Naval Career, Jack was indeed the “Jack-of-all-Trades.” He worked at various jobs doing anything necessary to provide for his family. Jack was gifted in drawing, painting and he enjoyed cooking. He also enjoyed drinking coffee and visiting with his buddies at McDonald’s. He was a member of the V.F.W., the American Legion, and was a past commander of the D.A.V. He loved his family immensely, and he will be remembered for “Always doing the right thing.” Jack’s family includes his wife, Peggy Van Skike of Oskaloosa; his children: Donald Van Skike of Riverton, WY, Sharon Trapp of Oskaloosa, David (Kristen) Petersen of Camden, SC, Duane Van Skike of Pahrump, NV, David Van Skike of Rena, NV, TeAnna (Shaun) Hasso of Des Moines, IA, Matthew (Chenoa) Van Skike of Oskaloosa, and Kathleen Van Skike of Oskaloosa; 16 grandchildren and two great-grandchildren. In addition to his parents, Jack was preceded in death by a son, Dennis, and a daughter, Patricia, and a brother, Bryan Van Skike. Memorial services for Jack will be held at 10:30 a.m., Wednesday, at the Good News Chapel, with Pastor Alvern Boetsma officiating. Visitation will begin at noon on Tuesday at Langkamp Funeral Chapel; the family will greet visitors from 4-6 p.m. Memorial contributions can be made in Jack’s name and will be designated among several Veterans Organizations.

The family of Jack Van Skike created this Life Tributes page to make it easy to share your memories.