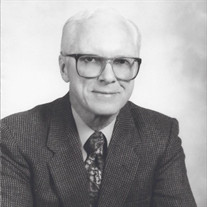 James Paulsen, 88, of Palm Springs, California, and formerly of University Park, Iowa, passed away Tuesday, October 6, 2020, at Rancho Terrace Assisted Living in Rancho-Mirage, California. James Kay Paulsen, son of Christian “Jack” Joshua and Laura Frances (Templeton) Paulsen, was born December 14, 1931, in Oskaloosa, Iowa, moving to University Park at age five, where he attended grade school K-8. Jim’s love of music was cultivated and demonstrated early in his life with piano and marimba lessons. While in the Boy Scouts, he earned the rank of “Life.” He played the trombone in the band and sang in the choir and other vocal groups in high school. Before graduating from Oskaloosa High School in 1951, Jim was both a trombonist and vocal soloist with the Oskaloosa City Band and sang in the College Avenue Friends Church Choir, where he was a member. Other local churches and organizations invited him to sing for them. Jim furthered his education at St. Olaf College in Northfield, MN, where he studied music, earning his Bachelor’s Degree in music education in 1955. While at St. Olaf, he toured the United States and Europe as a four-year member of the St. Olaf Choir. Upon completing his education at St. Olaf, Jim returned to the Oskaloosa area, where he taught K–12 music for Lacey Consolidated School and continued playing and singing with the city band and local organizations. After teaching for three years at Lacey he moved to California, where he received his junior high teaching credential. For the next 28 years, Jim resided in the Whittier, California, teaching junior high classroom subjects for 26 years and was the elementary music supervisor for two years. During these years of teaching, he gained his Master’s Degree in music education in 1967 from Fullerton College in Fullerton, CA. After 31 years of teaching, Jim retired in 1987. He lived in various places in CA, including 12 years in the Palm Springs area. In December 2001, he moved to the Big Island of Hawaii, remaining there for eight years before moving back to the Palm Springs area. Over the years, Jim had numerous hobbies and interests, including tennis, photography, carpentry, gardening, architecture, and writing. Jim’s family includes a sister and brother-in-law, Mary and Clyde Wiley of Newton, IA, and four nieces: Diane (Corbin) Van Wyk of Bondurant, IA; Kathy (Jeff) Sanderson also of Bondurant, Laura (Ryan) Meixner of Madison, WI and Sandy Wiley of Centennial, CO. In addition to his parents, Jim was preceded in death by a brother, Jack Weldon, in 1937, a nephew, Michael Wiley, in 2013, and a nephew-in-law, Jeffrey Sanderson. A private graveside funeral service will be held for Jim in Forest Cemetery. Memorials can be made to College Avenue Friends Church. Langkamp Funeral Chapel & Crematory has been entrusted with Jim’s final arrangements.

The family of James K. Paulsen created this Life Tributes page to make it easy to share your memories.

Send flowers to the Paulsen family.