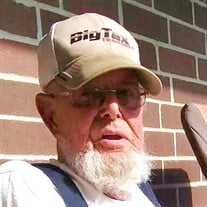 Jim Vander Martin, 81, of Oskaloosa passed away Wednesday, December 5, 2018, at the Mahaska Health Hospice Serenity House in Oskaloosa. James Edward Vander Martin, son of Henry H. and Ellen Amelia (Ford) Vander Martin, was born January 17, 1937, in Beacon, Iowa. He attended country school Union Number Three near Beacon through the eighth grade and then began working for his brother, Harold, delivering furniture for Sear & Roebuck. After three years with his brother, he ventured to Minneapolis where he worked at Rumford’s Laundry. It was there that he met Sharon Joann Antile, and they married September 25, 1957. They returned to Oskaloosa where James worked as a farm hand for a few years before starting his 30-year construction career. He worked on many local projects including the county law enforcement center, the junior high, and the library. After his divorce from Sharon, Jim married Sue Mitrisin, January 10, 1969. Jim enjoyed fishing and hunting in his free time. His family includes his wife, Sue Vander Martin; his children: Jill (Dan) Butler of Fremont, Russell Vander Martin of Keokuk, IA, and George Vander Martin of Oskaloosa; two step-daughters: Michelle Cooper of Oskaloosa and Mary Stien of Oskaloosa; several grandchildren; several great-grandchildren; his brothers: Earl (Wanda) Vander Martin of Beverly Hills, FL; and several nieces and nephews. In addition to his parents, Jim was preceded in death by his six sisters: Alice Vander Veer, Berdine Humphrey, Phyllis Momyaer, Jonitta Wilford, Dorothy Reynolds, and an infant sister; three brothers: Harold and Glenn John Vander Martin and one-year-old Willis Vander Martin. As was his wish, Jim’s body has been cremated. Burial of his ashes will be held at Henness Cemetery at a later date. Langkamp Funeral Chapel & Crematory has been entrusted with his arrangements. Memorial contributions can be made in his name to the family.

The family of James Edward Vander Martin created this Life Tributes page to make it easy to share your memories.