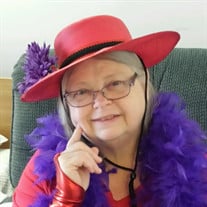 Janet “Cookie” Lee Crockett, 65, of Brookfield, Connecticut, passed away Monday, June 25, 2018, at Scripps Mercy Hospital in San Diego, California. Janet Lee Crockett, daughter of Robert Edgar and Elma Eileen (Noe) Werner, was born August 28, 1952, at Camp Polk, Louisiana. Because of her father’s military career, the family lived in Iowa, Alaska, Virginia, Texas, and Kansas, while Janet was growing up. She married Elmore L. Crockett, January 13, 1971, and to this union, four daughters were born. They later divorced. In addition to raising her daughters, Janet also worked as a checker at Wal-Mart, , and Eckerd Drug. Janet collected dolls, vinyl records, brochures, and cookbooks. Janet was living with her daughter in Connecticut and had gone to California to visit her younger daughter when she became ill and passed away. Janet was a member of DaVita Dialysis Association. She was an Organ Life-Saving Hero with tissue donation and at the time of her death, she saved five lives because of her generosity. Her family includes her daughters: Christina (Tim) DeLisle of Brookfield, CT, Evelyn K. Crockett of Liberty, TX, Dalenna Mae (Ted) Pettypool of Sulphur, LA and Bunny Rambo of San Diego, CA; nine grandchildren and six great-grandchildren. She is also survived by three brothers, Steven E. (Mary) Werner of Oskaloosa, Frederick Werner of Climax, NC, and Danny Ray Werner of Oskaloosa; an uncle, Richard Noe of University Park; two aunts, Harriet Chambers of Marshalltown, Iowa and Mary Jane Calhoun of Boise, Idaho; and many nieces, nephews, great-nieces and great-nephews. She was preceded in death by her parents and her ex-husband. Funeral Services will be held at 11 a.m., Thursday, July 5, 2018, at Langkamp Funeral Chapel in Oskaloosa with Pastor Phil Morrison of the Kirkville Community Church officiating. Burial will be in Highland Cemetery near Eddyville. Visitation will be held from 9:30 a.m. to service time on Thursday. Memorials can be made to her family and directed to Steven Werner.

The family of Janet Lee Crockett created this Life Tributes page to make it easy to share your memories.

Send flowers to the Crockett family.