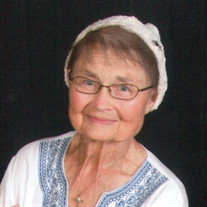 Janet Hankins, 87, of Eddyville passed away Sunday, September 2, 2018, at Mercy Medical Center in Des Moines, Iowa. Janet Elaine Hankins, daughter of John and Mary (Sickle) Hynick, was born January 7, 1931, in Harrison Township, near Eddyville, Iowa. She attended Iowa Central country school and graduated from Eddyville High School in 1949. Following her education, Jan moved to Waterloo where she worked as a secretary for the union at John Deere Manufacturing. On a trip to Forbes Field in Topeka, KS with her sister, Janet met her future husband, Ivan, a young Air Force Lieutenant, on a blind date. Romance blossomed, and she soon moved to Houston, Texas, where they married, April 9, 1954. They remained there until 1959, when Ivan was discharged. They returned to Iowa and settled on a farm near Tracy and lived there until 1966. They then moved to a farm on Indian Way. Janet was very involved in their poultry operation until it was destroyed by a tornado in 1979. She then held a variety of jobs at Oskaloosa Schools, Cablevey, William Penn College, and most recently at the Eddyville Library. In 2003, Jan and Ivan moved from the farm into Eddyville. Janet’s faith was paramount in her life. She was very involved at St. John Lutheran Church; she served as financial secretary, in the Altar Guild and also in the Lutheran Women’s Mission League. She enjoyed the beauty of God’s creation and loved feeding the birds. She enjoyed gardening and also cooking for her family. Her family includes her children and their spouses: Shari and Robert Barnhart of University Park and Ivan Dale and LaDawn Hankins of Waterloo, IA; grandchildren: Danielle French of North Liberty, Amanda (Carrie) Krienert of Waterloo, Mandy (Chuck) Quick of Ottumwa, Holden (Nikki) Barnhart of Oskaloosa, and Bailey and Boston Barnhart, both of University Park and 14 great-grandchildren. She is also survived by a sister, Lillyan Williams and a brother, John Hynick. In addition to her parents, Jan was preceded in death by her husband, Ivan on May 28, 2010, a grandson, Robert Barnhart Jr. and two brothers and four sisters. Funeral services for Janet will be held at 11 a.m., Thursday, September 6, 2018, at St. John Lutheran Church with Rev. Sam Beltz officiating. Burial will be at the Iowa Veterans Cemetery near Van Meter, IA. Visitation begins at noon on Wednesday; the family will greet visitors from 5-7 p.m., Wednesday evening. Memorials can be made to St. John Lutheran Church.

The family of Janet Elaine Hankins created this Life Tributes page to make it easy to share your memories.

Send flowers to the Hankins family.