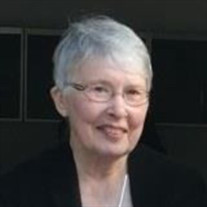 Jan Utterback, 81, of Ankeny and formerly of Oskaloosa and Leon, passed away Monday, March 09, 2020, at her home in Ankeny. Janice Ruth Utterback, daughter of Edward and Diverta Alma Van Hemert Dykstra, was born July 3, 1938, in Oskaloosa, Iowa. When she was three years of age, her family moved from Otley to a farmstead southeast of Oskaloosa. She was a 1956 graduate of Oskaloosa High School and continued her education at the Mercy School of Nursing in Des Moines, where she received her nursing diploma in 1959. Jan was united in marriage to Jack Utterback, January 1, 1961. She furthered her education at the V.A. School of Nurse Anesthesia in Des Moines from 1970 to 1972 and was then employed by Medical Center Anesthesiology P.C. in Des Moines. Jan’s first husband, Jack Utterback, preceded her in death, April 8, 1987. She married Howard Sears, December 15, 1990, in Des Moines, Iowa, and they made their home in Leon, Iowa, for 16 years and in 2012 moved to Ankeny, Iowa to be closer to her family. Jan was a member of professional nursing organizations: the Iowa Nurse Anesthetist Association & American Nurse Anesthetist Association, Greater Des Moines Quilters Guild, and Heartland Quilters Guild, Texas Long Horn Breeders Association of America and the Decatur County Hospital Auxiliary. She attended the Cornerstone Baptist Church in Ankeny, IA. She enjoyed quilting, reading, and spending time with family. Jan’s family includes her husband, Howard Sears of Ankeny, IA; a daughter and son-in-law, Jacquelyn and Don Ronnfeldt of Iowa City, IA; two sons and daughters-in-law: Jon and Annette Utterback of Ankeny, IA and James and Angela Utterback of Ames, IA; seven grandchildren: Justin, Tyler, Matthew, & Lauren Ronnfeldt and Jack, Ryan, & Megan Utterback; 21 great-grandchildren; two sisters and brothers-in-law: Peggy and John Kirk of West Des Moines, IA and Nora and John Mosher of The Villages, Florida; two brothers and sisters-in-law: Roger Dykstra and Kathleen Carr of Londonderry, NH and Michael and Anna Dykstra of Pella, IA; two step-daughters and their husbands: Carol and Kevin Clemen of Amana, IA, and Donna and Ronnie Bruce of Poplar Bluff, MO; a step-son and wife, Ron & Tina Sears of Burleson, TX; eight step-grandchildren: Jenni, Missy, Travis, Holly, Camille, Brittany, Shawnda, and Stephanie and twelve step-great-grandchildren. Besides her first husband, she was preceded in death by her parents and a dear sister-in-law, Marjorie Brown Dykstra. Funeral Services for Jan will be held 10:30 a.m., Friday, March 13, 2020, at the First United Methodist Church at 206 Southwest Walnut in Ankeny, Iowa, with Rev. Angie Loomis officiating. Burial will be in Forest Cemetery in Oskaloosa, Iowa. The family will greet visitors from 5-7 p.m., Thursday evening, at the church. Memorial contributions can be made to Decatur County Hospital Auxiliary or the Blessman Ministry Days for Girls.

The family of Janice Utterback created this Life Tributes page to make it easy to share your memories.

Jan Utterback, 81, of Ankeny and formerly of Oskaloosa and Leon,...

Send flowers to the Utterback family.