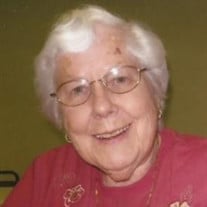 Jean Barnhill, age 91, of Oskaloosa passed away Friday, August 7, 2020, at the Oskaloosa Care Center. Phyllis Jean Barnhill, one of seven children born to Ernest Calvin and Inez (Godfrey) Tandy, was born November 24, 1928, in Oskaloosa, Iowa. Following her graduation from Oskaloosa High School in 1946, Jean began working at Northwestern Bell as a telephone operator. She also worked at Wake's Feed and the Mahaska County Court House, before opening the A & W Restaurant on A Avenue in Oskaloosa. Jean married Robert "Barney" William Barnhill January 30, 1969, in Fort Myers, Florida. Together they operated the restaurant and eventually built a new building on A Avenue. After Robert's retirement in 1980, Jean sold the restaurant, and it was changed to Dairy Queen and, eventually, Chuong's Garden. Jean and Robert enjoyed 18 years of traveling and wintering in Lanark Village, Florida. While living there, they were members of the Lanark Village Community Church and active in many activities. They returned to live full-time in Oskaloosa in 2004. Jean was a member of the First Christian Church in Oskaloosa, the V.F.W. and American Legion Auxiliaries, Oskaloosa Altrusa Club, and D.A.R. She was an avid reader, enjoyed studying the Bible and researching genealogy. She also loved playing BINGO and her daily coffee time with friends at McDonald's. Jean's legacy was her kindness, compassion, and most of all her love and devotion for her family. She will be missed by so many and she has surely heard Jesus say ..."Well done, good and faithful servant." Jean's family includes her nephews and nieces: Bob Okerstrom of Mason City, Beverly Saunders of Nebraska, Sherry Vander Schoor of Des Moines, Vicki (Roger) Hoch of Ankeny, Russell (LuAnn) Tandy of Columbia, MO, Bill Tandy of Knoxville, Tanya (Wally) Hopf of Knoxville, Steve (Barb) Tandy of Carl Junction, MO, and Carla Tandy of Monument, CO; many great-nieces and nephews; her step-children: Jane (Wayne) Monroe of Ottumwa, Robert Barnhill of Houston, TX, and Jim (Heidi) Barnhill of Deerfield, WI; many step-grandchildren and step-great-grandchildren; and her dear friend, Bonnie Newell of Oskaloosa. In addition to her husband, Barney, and her parents, Jean was preceded in death by four sisters: Lucille Tandy, Violet Okerstrom, Ruth Saunders and Thelma Buyert, and two brothers: Raymond and Russell Tandy. Funeral services for Jean will be held at 10:30 a.m., Wednesday, August 12, 2020, at Langkamp Funeral Chapel with Reverend Molly Goodrich of the First Christian Church officiating. Burial will be in Forest Cemetery. Visitation will be held from 10 a.m. to 7 p.m., Tuesday at the funeral chapel. According to the rules put in place by the Iowa Department of Public Health, proper social distancing and reasonable personal protective equipment are advised for attending this public event. Memorial contributions can be made to the First Christian Church or Stephen Memorial Animal Shelter.

The family of Jean Barnhill created this Life Tributes page to make it easy to share your memories.

Send flowers to the Barnhill family.