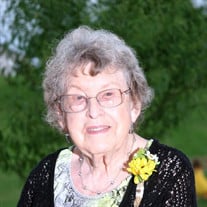 Jean L. Edwards, 95, of Oskaloosa, passed away Friday, February 7, 2020, at Northern Mahaska Specialty Care in Oskaloosa. Jean Louise Edwards, daughter of Sam and Laura (Work) Phelps, was born August 31, 1924, in Monmouth, Illinois. She graduated from Monmouth College and interned in Medial Technology at Minneapolis General Hospital. Her first job as a medical technologist was at Mahaska Hospital in Oskaloosa. She later worked for the University of Iowa lab and then for several years at Mercy Clinic. In 1951, she married Roy Edwards, and they were blessed with two children, John and Betsy. Jean was a member of the First Presbyterian Church, American Legion Auxiliary and Beta Signa Phi. She enjoyed reading, sewing, knitting, quilting and stamp collecting. In retirement, Jean volunteered at the Knoxville VA and worked for Indian Hills Community College in adult education. She also did insurance medical exams for many years. Her family includes her son, John Edwards of Oskaloosa and his sons, Jeremy (Stephanie) Edwards of Valparaiso Indiana and their children: Samantha, Alexandra and Daniella; and Jordan (Anya) Edwards of Lincoln Nebraska; Jean’s daughter, Betsy (Bryan) DeGroot of Oskaloosa and her daughters: Leisha (Alvaro) Ramos of Oskaloosa and their children: Fernando, Adriana, Nicholas and Elliana; and Carrie DeGroot of Clinton and her children: Conner, Carson and Brycen; and her son, Brandon DeGroot of Oskaloosa. She is also survived by her sisters: Marjorie Powers of Mount Morris, IL, and Carolyn Phelps of Monmouth, IL. In addition to her parents, Jean was preceded in death by her husband Roy of 63 years in 2014, a brother, David Phelps, sisters: Edna Carlson and Margaret Noakes, and a sister-in-law, Gail Mulienburg. Funeral services for Jean will be held at 10:30 a.m., Saturday, February 15, at the First Presbyterian Church in Oskaloosa with Rev. Craig Palmer officiating. Burial will be in Forest Cemetery. Visitation will begin at 10 a.m., Friday at Langkamp Funeral Chapel; the family will greet visitors from 5-7 p.m. Memorial contributions can be made to the First Presbyterian Church, Oskaloosa Public Library or the Stephen Memorial Animal Shelter.

The family of Jean Louise Edwards created this Life Tributes page to make it easy to share your memories.