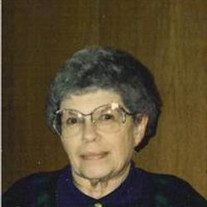 Jean Evelyn Swanson: Jean died early Tuesday morning, January 6, 2004 at Mahaska Hospital at the age of 80 years, 1 month and 25 days. Jean is survived by her husband, Ray Swanson of Oskaloosa; two daughters, Christina Randell and Jennifer Swanson both of Oskaloosa; and two sons, John A. Swanson of Oskaloosa and James R. and his wife, Sandra Swanson of Des Moines; and six grandchildren: Charlie Randell of Cedar Rapids, Anne Randell of Coralville, Amanda, James, Jessica and Mary Swanson all of Leon, Iowa. Jean Evelyn Swanson, daughter of Edward Abbott and Evelyn Smith McFadden, was born on November 12, 1923 in Oskaloosa Iowa. Jean is a 1941 graduate of Oskaloosa High School and a 1946 graduate of the University of Iowa with a degree in music. She married Ray Swanson on June 2, 1946 in Oskaloosa. Jean was a vital part of the music community in Oskaloosa. She played the organ for some 40 years and accompanied vocalists at numerous weddings and funerals. She was a member of Central United Methodist Church where she served as organist for 27 years. She was twice a Delegate at the Iowa Annual Conference of the United Methodist Church, directed the Adult Couples Bell Choir and was a member of the Women's Bell Choir. Jean donated a set of hand bells to her church and a harpsichord to William Penn College Fine Arts Department. She was a past president of and served on the Oskaloosa Public Library Board. She was a charter member of P.E.O. Chapter NN, and a member and past President of P.E.O. Chapter IO, and was instrumental in organizing an Iowa State P.E.O. Convention. Jean enjoyed traveling, embroidery, reading, bridge and classical music. She is preceded in death by her parents. PDF Printable Version

The family of Jean Evelyn Swanson created this Life Tributes page to make it easy to share your memories.

Send flowers to the Swanson family.