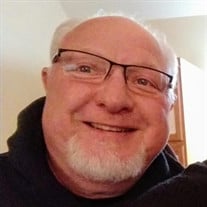 Jeff Kuntz, 63, of Oskaloosa passed away early Friday morning, April 17, 2020, at his home in Oskaloosa. Jeffery Bryan Kuntz, son of William Edward and Marilyn Jean (Young) Kuntz, was born December 8, 1956, in Oskaloosa. As a youngster, Jeff’s family moved to Michigan, and he was a 1975 graduate from Harry S. Truman High school in Taylor, MI. He and his twin brother, Greg then attended Western Michigan University in Kalamazoo and he earned his Bachelor’s Degree in Agriculture Distribution in 1980. Jeff returned to Iowa and settled in the Oskaloosa/Sigourney area and began working for the U.S. Department of Agriculture. Jeff continued his education at Iowa State University, and in 2006, he was awarded his Master’s Degree in Agriculture from ISU. Throughout his career, Jeff traveled globally to underdeveloped countries to improve their agricultural techniques and methodologies. In addition to working for the USDA, Jeff purchased and operated the family farm near Sigourney and owned and operated Stowit Storage in Oskaloosa. After a brief retirement from a fulfilling career with the USDA in 2014, Jeff began working for the County Bank in Sigourney; he eventually served as vice-president. Jeff was a member of the Oskaloosa Elks Club. He enjoyed gardening, hunting, and fishing. He was a true and loyal son, brother, uncle and friend and will be fondly remembered by many. His family includes his father, William “Bill” Kuntz of Sigourney, his siblings: his identical twin brother, Greg (Sue) Kuntz of Coralville, Mark (Pamela) Siegfried of Mooresville, NC, Vicky (Carl) Kostman of Troy, KS, Clark Kuntz, Preston Kuntz, and Travis Kuntz; and many nieces and nephews. Jeff was preceded in death by his mother. As was his wish, Jeff’s body has been cremated. Burial of his ashes will be in Union Mills Cemetery near New Sharon, Iowa. Due to the restrictions put in place by the Department of Public Health due to the COVID 19 Pandemic, no services will be held at this time. Langkamp Funeral Chapel & Crematory has been entrusted with Jeff’s arrangements.

The family of Jeff Kuntz created this Life Tributes page to make it easy to share your memories.

Send flowers to the Kuntz family.