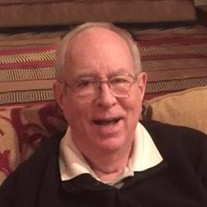 Jerry McClun, 81, of Pella and formerly of Oskaloosa passed away Monday evening, March 4, 2019, at Mercy Medical Center in Des Moines, Iowa. Jerry Bruce McClun, son of Beauford “Boots” Vaughn and Stella Christina (Brom) McClun, was born January 14, 1938, in Oskaloosa, Iowa. He was a 1956 graduate of Oskaloosa High School. He furthered his education at Bob Jones University in Greenville, South Carolina, where he met the love-of-his-life, Joanne Wood, a student from Ohio. After Jerry earned his degree, they married, August 13, 1960, in Akron, Ohio. His first job was as a news producer in Wichita, Kansas at television station KARD. He later worked in public relations at Beech Aircraft in Wichita for a brief time before moving the family to Pittsburgh in the mid-’60s for a position producing the news with KDKA. Three years later, he accepted a position as executive producer for WBBM in Chicago. Jerry remained at the station until 1973, when he was hired by the Russ Reid Company, an advertising agency in Pasadena, California. He retired from the agency in 1995, and he and Joanne moved to the island of Fiji, where they lived for about four years. Upon their return to the states, they purchased a motorhome and traveled the lower 48 states for five years. They eventually settled in Pella where they lived for three years, then moved to Lake Keomah for eight years and returned to Pella in 2015. Jerry’s family includes his wife, Joanne; his sons: Kevin Scott McClun of Oceanside, CA and Kent (Theresa) McClun of Southington, CT; Grandson, Kyle Gavin McClun of Southington, CT; a brother, Robert McClun of Minneapolis, MN; and many nieces and nephews. In addition to his parents, Jerry was preceded in death by a brother and sister-in-law, Maurice and Lola McClun and two sisters-in-law, Donna MClun and Lois McClun. Memorial services for Jerry will be held at 11 a.m., Friday, March 8, 2019, at the Fellowship Bible Church with Pastor Rodney De Ronde officiating. Instead of sending flowers, the family requests memorials contributions to the Fellowship Bible Church. Langkamp Funeral Chapel and Crematory is handling the arrangements.

The family of Jerry Bruce McClun created this Life Tributes page to make it easy to share your memories.

Jerry McClun, 81, of Pella and formerly of Oskaloosa passed away...

Send flowers to the McClun family.