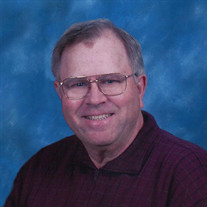 Jerry Walter McCrea, age 82, of Oskaloosa, passed away on Saturday, May 8, 2021, at The Mahaska Health Hospice Serenity House in Oskaloosa, Iowa. He was born on August 31, 1938, the son of Walter and Jeannetta (Lokers) McCrea at home in rural Eddyville, Iowa. He attended Eddyville High School and graduated with the Class of 1956. He later attended William Penn College and earned his bachelor’s degree in Education in 1961. While attending college, Jerry played baseball for the William Penn Rangers. He later attended Northeast Missouri State University and earned his master’s degree in secondary guidance. On September 1, 1962, he was united in marriage to Sharon Rinehart at the First Christian Church in Oskaloosa and later welcomed two sons, Ron and John. Jerry taught science at Melcher-Dallas high school and Oskaloosa Junior High School. He later became a guidance counselor at the junior high school. Jerry spent many years coaching and officiating baseball, softball, football, basketball, and track. He earned his pilot’s license and enjoyed flying his family to local fly-ins, short getaways, and to watch William Penn Football play and win in the Boot Hill Bowl. He also loved hunting and fishing. When his family was young, they took many fishing trips to Minnesota and Canada. Jerry also enjoyed fishing in retirement with Sharon in Missouri and visiting with their neighbors. Another hobby for Jerry was remodeling, painting, and doing general contractor work on houses. He began farming in the early eighties, growing corn and soybeans and raising farrow-to-finish hogs. His passion for teaching extended beyond his retirement from Oskaloosa Community Schools. He enjoyed helping his grandchildren learn about livestock through their 4-H projects and employing local vocational agriculture students as hired hands on the farm. Jerry served on the Mahaska County Extension Council for several years. Jerry was an avid Chicago Cubs fan and loved baseball. He was a strong supporter of the William Penn Statesmen athletic programs. His family includes his wife of 58 years, Sharon of Oskaloosa, his son Ron (Robyn) of Oskaloosa; four grandchildren, Amanda (Daniel) Foster, Debra (Stephen) Cronin, Nicole (Erik) Palmquist, all of Oskaloosa, and Jake McCrea of New Sharon and six great-grandchildren; Norah, Bennett, Hazel, Fallon, Owen, and Decker. He is also survived by his siblings, Chuck (Ellen) McCrea of Eddyville, and Patricia Elscott of Oskaloosa, and sister-in-law Peggy McCrea of Eddyville. Jerry was preceded in death by his parents, his brother Jack, a brother-in-law Gaylord Elscott, a sister-in-law Judy Bridges, and his son John. Funeral services will be held Tuesday, May 11 at 10:30 a.m. at the Langkamp Funeral Home in Oskaloosa, with pastor Molly Goodrich officiating. Visitation will be at Langkamp Funeral Chapel & Crematory on Monday, May 10, beginning at 11 a.m.; the family will be present from 4-7 p.m. to greet family and friends. As was Jerry’s wish, his body will be cremated following the funeral ceremony. Burial of the urn will be in Forest Cemetery at a later date. The family request memorial contributions are made to the Mahaska County YMCA Capital Campaign instead of floral tributes.

Jerry Walter McCrea, age 82, of Oskaloosa, passed away on Saturday, May 8, 2021, at The Mahaska Health Hospice Serenity House in Oskaloosa, Iowa. He was born on August 31, 1938, the son of Walter and Jeannetta (Lokers) McCrea at home in rural... View Obituary & Service Information

The family of Jerry Walter McCrea created this Life Tributes page to make it easy to share your memories.

Jerry Walter McCrea, age 82, of Oskaloosa, passed away on Saturday,...

Send flowers to the McCrea family.