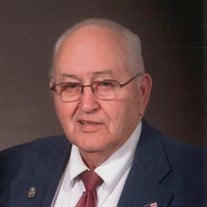 Jerry D. Van Zomeren, 83, of Oskaloosa passed away November 30, 2020 at Mahaska Health in Oskaloosa. Jerry David Van Zomeren, son of Walter David and Josephine (Van Haaften) Van Zomeren, was born January 17, 1937, in Mahaska County. His family lived on several farms in the county, and Jerry attended country school until attending Fremont High School, where he graduated in 1955. Upon completing his education, Jerry helped his father farm and began driving truck, hauling animals and rock. Jerry married Shirley Ann Jacobs on October 28, 1961, at Central Reformed Church in Oskaloosa. Just six weeks later, on December 12, 1961, Jerry was inducted into the Army. He served with the Army Medical Service and was discharged on October 9, 1963. After returning home, he and Shirley made their home in rural Oskaloosa, and Jerry continued to drive truck and also farm. He enjoyed living in the country and especially enjoyed helping his nephew, Steve, combine. Jerry also enjoyed gathering with his friends over a cup of coffee and tinkering on projects with his friend and “partner in crime,” Tony. Jerry and Shirley enjoyed many trips to Yellowstone National Park, sightseeing and spending time with their family, Nancy, in Missoula, Montana. Jerry was a member of Central Reformed Church and the American Legion. His family includes his wife of over 59 years, Shirley; his children, Rick Van Zomeren of Oskaloosa, Kelli (Craig) Reeves of Sigourney, and Jason (Brandi) Van Zomeren of Waterloo; five grandchildren; three great-grandchildren; two sisters: Joanne (Gerald) Roquet of Hedrick and Marylinn (Jim) Rice of Ottawa, IL; and a brother-in-law, Don Verros of Pella. In addition to his parents, Jerry was preceded in death by a sister, Nancy Verros. Private family graveside services will be held for Jerry at Forest Cemetery with Rev. Jon Nelson of Central Reformed Church officiating. Military Honors will be presented by the Oskaloosa Honor Guard. Memorials can be made to Central Reformed Church. Langkamp Funeral Chapel has been entrusted with the arrangements.

The family of Jerry David Van Zomeren created this Life Tributes page to make it easy to share your memories.