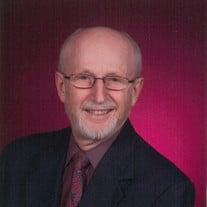 Jerry J. Zear, 77, of Oskaloosa passed away Saturday evening, September 22, 2018, at the MHP Hospice Serenity House in Oskaloosa. Jerry Joe Zear, son of Raymond and Nellie (Bitner) Zear, was born March 2, 1941, in Delta, Iowa. He was raised on the farm and attended Boston School, a one-room country school, a mile from his home in Keokuk County. He was a 1959 graduate of Richland High School, where he played the trumpet and played in small instrumental groups in S.E. Iowa. He earned his teaching degree in Science Education from William Penn College in 1963 and a master’s degree in Science education from NE Missouri State University in 1972. Through his teaching career, Jerry taught in public schools in Fremont, Redfield, and Algona for 34 years, before retiring in 1997. He also taught a course for science teachers one summer at the University of Northern Iowa. During his years of teaching, Jerry became the “Sound Guy” at the schools and in the communities he resided. And while he lived in Algona, he operated Video Creations, a business doing videos of weddings and other occasions. Jerry married Ruth Visser, March 28, 1997. They made their home in Oskaloosa and Jerry became involved in the community. He served on the Oskaloosa Evangelism Committee, where he assisted with the planning and advertising for Christian music events they sponsored in the community. After moving to Oskaloosa, he readily shared his equipment and expertise in sound again. Working with the chamber, Jerry set up speakers and microphone for the numerous announcing stations for the Lighted Christmas Parade. He also provided his skills and resources at the Town and Country Banquet, Steven Memorial Animal Shelter events, and many other local happenings. In 2010, Jerry was recognized by the Chamber of Commerce as “Volunteer of the Month,” and in 2014, he was again honored by the chamber as “Volunteer of the Year” for his many years of providing sound to the community. Jerry is survived by his wife, Ruth. In addition to his parents, he was preceded in death by his brother, Danny. Visitation will begin after 11 a.m., Wednesday, September 26, 2018, at Langkamp Funeral Chapel in Oskaloosa; the family will greet visitors from 5-7 p.m., Wednesday evening. Private graveside funeral services will be held at Forest Cemetery. In lieu of flowers, the family requests memorial contributions made to Stephen Memorial Animal Shelter. Memories and condolences can be sent to the family by visiting langkampfuneralchapel.com.

The family of Jerry J. Zear created this Life Tributes page to make it easy to share your memories.

Send flowers to the Zear family.