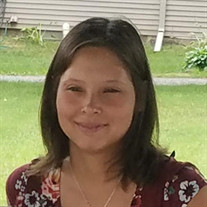 Jessica Paige Hudson Kincel, 29, of Oskaloosa became a beautiful guardian angel of her amazing little girls on November 9, 2017. Jessica was born on July 17, 1988, in Iowa City to Angela Fisher Sheely and Larry Hudson. They later divorced. Jessica was raised in Oskaloosa and was a 2007 graduate of Oskaloosa High School. She enjoyed her former job at Wal-Mart and, her current position at the Verizon Store in Oskaloosa. Jessica was an amazing woman who loved her daughters fiercely. They were her heartbeat. She loved cuddling and watching movies with the littles. They would read and sing and play and learn and of course, Love. Jessica also enjoyed watching horror movies, relaxing by the river, camping, hiking and music. Her memory will be cherished by her daughters, Jadelynn and Juliette Kincel and Lana Watters, as well as, a special little lady, Leah Watters all of Oskaloosa; her parents, Angela and Terry Sheely and Larry Hudson, all of Oskaloosa; her brother, BJ Hudson of Oskaloosa; great-grandmother, Wilma Harville of Ottumwa; grandparents, Ruth Fisher of Ottumwa, Darwin Sheely of Oskaloosa, Daniel and Judy Fisher of Des Moines, and Virginia Paulson of University Park. She is also survived by her aunts and uncles: Susan and Chuck Ellison Eddyville, Daniel T. Fisher of Eldon, Molly Gordon of Agency, Kate and Dennis McCrea of Rose Hill, Shari and Dick Pyle of Shakopee, Minnesota, Misty Beane of New Virginia, Carole and Rudy McDaniel of Florida, and Veronica and Kirk Montgomery of Oskaloosa; an amazing friend and father to Jadelynn and Juliette, Jason Kincel; and Jason's family who also loved her; and so many wonderful cousins and great-aunts and great-uncles. Jessica followed the stairs to Heaven that her baby sister, Bailey Hudson; grandmother, Shirley Sheely; great-aunt, Dianna Knecht; aunt, Danielle Fisher; uncle, Larry Sheely; and great uncle, Dale Polson climbed. A memorial gathering will be held from 10:30 a.m. to 12:30 p.m. Thursday, November 16, 2017, at Langkamp Funeral Chapel and Crematory. Memorials services are pending at Langkamp Funeral Chapel & Crematory. In lieu of flowers memorial contributions may be made to the family. The family welcomes any photos that can be shared for her daughters. All guests are welcome to attend a luncheon in Jessica's honor; it will be held at the Central United Methodist Church Fellowship Hall immediately following the Memorial Gathering/Time of Remembrance at 12:30 p.m.

The family of Jessica Paige Hudson Kincel created this Life Tributes page to make it easy to share your memories.