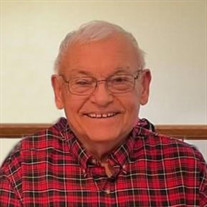 Jim Hall, 77, of University Park, passed away Friday evening, December 31, 2021, surrounded by his family at his home. James Fint Hall, son of Weldon Ackley and Phyllis Arlene (Johnson) Hall, was born November 13, 1944, at his parents’ home in Webster, Iowa. He attended elementary school in Keswick and went to What Cheer for high school. After graduating in 1963, he began farming with his father. In 1965, he enlisted in the Navy and served as a Seabee. He was released from active duty in 1968 and returned to Iowa to work on the family farm. He transferred to the Naval reserves and served until his discharge in 1971. On September 4, 1971, he married Cheryl Lee Zimmerman at First Baptist Church in Davenport, Iowa. They made their home in the Keswick area, where he and Cheryl established their home and farm. In addition to farming, from 1980 – 1996, Jim worked for Crow’s Hybrid Corn Company as a salesman and eventually as a regional manager. In 2006, Jim and Cheryl moved to University Park. Jim was a member of the Fellowship Bible Church in Oskaloosa and the American Legion in Keswick and V.F.W. in Oskaloosa. He enjoyed country living, especially hunting and attending his grandchildren’s activities. Jim’s family include his wife, Cheryl of University Park; children: Emily (Mark) Roering of West Des Moines, Travis Hall of North Liberty and Derek (Jill) Hall of Webster; nine grandchildren: Zachary, McKenna, and Lainey Roering, Kenzie Niss, Avery Hall, and Ayla, Emery, Griffin and Nora Hall. He is also survived by his siblings: Jon (Janet) Hall of Nisswa, MN, Jerilyn Dryden of Manchester, and Jocilyn (Steve) Dietrich of Williamsburg, and his brothers-in-law, Don (Sandi) Zimmerman of Unionville, IA, and Dallas (Lisa) Zimmerman of North English, IA. Jim was preceded in death by his parents. Jim’s funeral services will be held at 10 a.m., Tuesday, January 4, 2022, at Langkamp Funeral Chapel, with Reverend Norman Adamson officiating. Jim’s body will be cremated following the service, and his ashes will be buried privately in Sorden Cemetery in Keokuk County. Visitation will begin at 10 a.m., Monday at the funeral chapel; the family will greet visitors from 4-7 p.m. Memorial contributions can be made to East Iowa Bible Camp.

The family of Jim Hall created this Life Tributes page to make it easy to share your memories.

Send flowers to the Hall family.