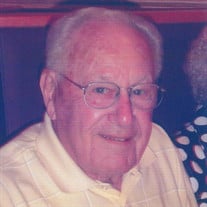 Jim Harsh, 97, of Oskaloosa, passed away Sunday, November 29, 2020 at the home of his granddaughter in Davenport, Iowa. James L. Harsh, son of Delbert and Helen (Wickle) Harsh, was born March 21, 1923, in New Virginia, Iowa. He was a 1941 graduate of New Virginia High School, where he played basketball and baseball. Soon after graduating, he went to work at the Fort Des Moines Hotel as head of the beverage department; he later became a cook at the hotel. On July 4, 1942, he married Evelynn Dickinson, and they made their home in Des Moines. Jim was drafted into the Army on February 23, 1943; he served half of his three years at Camp Pendleton, Virginia, with the 46th Coast Artillery Regiment. He served the remaining half of his service time with the 783rd Armored Field Artillery Battalion as a cook and mess sergeant. Upon his discharge in 1946 and return to Iowa, Jim went to work for Hyde-Vredenburg Supply Store (now Hy-Vee). In 1950, he moved to Oskaloosa, and he accepted a position as a wholesale meat salesman for Swift and Company. In 1956, the coffee shop at the Downing Hotel was available to lease, so Jim accepted the job. He managed the coffee shop until 1964 when he took a job with Oskaloosa Food Products as plant manager. Jim remained in that position until his retirement in 1987 but continued to work for the company part-time until 2002. Evelynn passed away in 1985. Jim married Betty Shanks in 1987. He and Betty enjoyed many winters in Arizona after Jim’s retirement. He was a member of the Central United Methodist Church, the Mahaska Masonic Lodge #644, and the Oskaloosa Elks Club. Jim was an avid golfer and a lifetime member of Elmhurst Country Club and the Oskaloosa American Legion. Jim’s family includes his wife, Betty of Oskaloosa; his sons: Jim Jr. (Deann) of Surprise, AZ and Tom (Jeri) of Surprise, AZ and Colona, IL; a step-daughter, Debbie (Clete) Mosbach of Greenfield; four granddaughters: Amy (Steve) Rogenski of Moline, IL, Justean (Shawn) Palmer of Surprise, AZ, Dr. Lauri Harsh (Dr. Tom Ramstack) of Davenport, and Jill (Steve) Oostendorp of Davenport; 11 great-grandchildren; and a sister, Margaret Harris of Iowa City. In addition to his parents and his first wife, Jim was preceded in death by a sister, Gulya, in 2018. Graveside Funeral services for Jim will be held at 11:15 a.m. Wednesday, December 2, 2020, at Forest Cemetery with Rev. Chad Lierman of the Central United Methodist Church officiating. Military Honors will be presented by the Oskaloosa Honor Guard. The cemetery’s North 11th Street entrance can be used when attending the service. A visitation will be held from 9-11 a.m. prior to the funeral service. According to the rules put in place by the Iowa Department of Public Health, proper social distancing and appropriate personal protective equipment are advised for attending this public event. The service will be available to view on the Langkamp Funeral Chapel’s YouTube channel Wednesday afternoon for those unable to attend the ceremony. Memorial contributions can be made to Central United Methodist Church.

The family of Jim Harsh created this Life Tributes page to make it easy to share your memories.

Send flowers to the Harsh family.