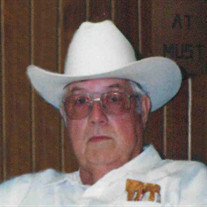 Jim McDonough, 84, of Oskaloosa passed away Thursday evening, January 18, 2018, at Mahaska Health Partnership in Oskaloosa. Marion “Jim” Lee McDonough was born December 20, 1933, to Chester “Pete” and Mary B. (Perkins) McDonough on a farm near Lacey. His parents moved to a farm north of Oskaloosa when he was age two. He was a 1952 graduate of Oskaloosa High School and while in high school he enjoyed football, basketball, and track. Jim was inducted into the U.S. Navy March 21, 1956. Of the 19 months he served, he was stationed on an aircraft carrier, the USS Kearsarge for seven months. He was discharged October 17, 1957. While still in high school, Jim began working part-time for Carmichael & Son Livestock. He later worked for Archie Long Livestock Oskaloosa Sale Co. and then became an employee and stockholder of Oskaloosa Livestock Auction, Inc. He worked there for 30 years. Jim married Dorothy Jean Groenendyk, November 29, 1957, at the Tracy Christian Reformed Church. They made their home in Oskaloosa, where they raised their two children. The family enjoyed camping with family and friends, especially at the Iowa State Fair. He was a member of the original Mahaska County Sheriff’s Posse and was a long-standing member of the Good News Chapel, where he served on the church council. After Jim’s retirement, they moved to an acreage north of Oskaloosa and enjoyed several winters in Mesa, Arizona. In his later, senior years, Jim especially enjoyed taking long drives around the country and reminiscing about the past history of Oskaloosa- it's farms, it's family's, it's land. He still had a sharp eye for assessing cattle and loved looking out his windows at the horses grazing in his pasture. Jim’s family includes his children: Mary (Dan) Major of Oskaloosa and Jeff (Kirstin) McDonough of Pentwater, MI; four grandchildren: Cody and Cortney Major and Linnea and Gannon McDonough; and a brother-in-law, Harold (Marie) Van Maanen of Pella. In addition to his parents, Jim was preceded in death by his wife, Dorothy on September 3, 2011, after 53 years of marriage; an infant son, Todd Allen; three brothers: Glenn and Norman McDonough and an infant brother, Lester; and sisters: Alice Hol and Grace and Margaret as small children; five sisters-in-law: Luella VanMaanen, Iola McDonough, Hilda Groenendyk, Helen Groenendyk and Margaret Reed; and brothers-in-law: Maurice “Butch” and Ed Groenendyk. Funeral Services for Jim will be held at 10:30 a.m., Wednesday, January 24, 2018, at the Good News Chapel in Oskaloosa with Pastor Alvern Boetsma officiating. A family prayer service will precede the funeral at 10:15 a.m. in the lower level of the church. Burial will be in Forest Cemetery with Military Honors by the Oskaloosa Honor Guard. Visitation will begin at 10 a.m. on Tuesday at Langkamp Funeral Chapel. The family will greet visitors from 5-7 p.m. Memorial contributions can be made to The Good News Chapel. Memories and condolences can be sent to the family by visiting langkampfuneralchapel.com.

The family of Jim McDonough created this Life Tributes page to make it easy to share your memories.

Send flowers to the McDonough family.