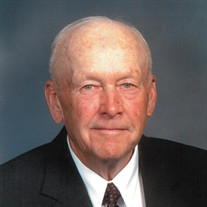 Jim Overbergen, 91, of Oskaloosa passed away Tuesday, September 29, 2020, at the Oskaloosa Care Center. James Edward Overbergen, eldest son of William and Elizabeth Marie (Van Zante) Overbergen, was born December 14, 1928, at his parents' rural home near Leighton, Iowa. He attended Prine School. After completing his education, he began working for his father full-time on the family farm west of Oskaloosa. Jim married Marsha Hila Jansen on June 22, 1955, at her home in Pella. They made their home in Oskaloosa for a short time before returning to live in the home place west of town. In addition to crops, Jim, with the help of his four sons, milked cows and raised hogs, cattle, and chickens. Jim and Marsha remained on the farm until 1987, when they purchased a home in Oskaloosa. Even after moving to town, Jim continued to help and advise his sons on their farms well into his 80's. After his move, he really started to enjoy his garden and share its bounty with family and friends. Jim enjoyed spending time with his family. When the kids were younger, they took trips to Woman Lake in Minnesota. They rented cabins and enjoyed a week of fishing, skiing, and swimming with Ted, Connie, and their children; Victoria, Sheri, and Todd. It was a wonderful vacation for all the Overbergens. The family also recalls many other family trips exploring the U.S. Fishing trips with his friends to Nungesser Lake were also some of his favorite get-a-ways. Later on, he started going there with his boys and grandsons. Jim and Marsha also enjoyed many trips with friends to Europe: sightseeing in Holland, Germany, Spain, and Switzerland. He and Marsha also enjoyed the simple joy of riding their bikes around the neighborhood. They also rode many bike trails in Iowa, and during the fall, they would go along the Mississippi to look at the leaves. Having coffee with his buddies at McDonald's was his way to connect with friends. Jim was a quiet man, and he was an avid reader; he looked forward to reading the Des Moines Register each day. His true joy in life was being able to spend time with his sons and their families. Every other Sunday, the boys and their families went to Jim and Marsha's house for lunch. This was a tradition that created a special bond between grandparents and grandchildren. Jim was a life-long member of Central Reformed Church, where he served many terms as deacon and elder. His family includes his wife, Marsha of Oskaloosa; his four sons: Bill Overbergen of Leighton, Tom (Deb) Overbergen of Pella, Jon (Janet) Overbergen of Leighton, and Mike (Andrea) Overbergen of Oskaloosa; nine grandchildren: Cari (Mike) O'Sullivan of Altoona, Brad Overbergen of Oskaloosa, Julie (Mike) Van Utrecht of New Sharon, Jennifer (Lane) Matice of Pella, Steven (Miranda) Overbergen of Altoona, Matt (Sheri) Overbergen of Oskaloosa, Katie (Austin) Vander Linden of Pella, Nicole (Cale) Smith of Indianola and Sarah Overbergen of Marion; and 13 great-grandchildren: Connor and Carter O'Sullivan, Lexi and Maddie Van Utrecht, Mackenzie Overbergen, Maxon Matice, Haley, Levi, and Caleb Overbergen, Brynlee, Benten, and Hollynd Vander Linden, and Mason Smith. Jim is also survived by his brother and sister-in-law, Ted and Connie Overbergen of Oskaloosa, a niece, Victoria (Jack) O'Brien, and a nephew, Todd (Rhonda) Overbergen. In addition to his parents, Jim was preceded in death by a sister-in-law, Evelyn Dykstra, an infant great-grandson, Reid Matthew Vander Linden, and a niece, Sheri Waterman. Jim's funeral services will be held at 10:30 a.m., Friday, October 2, 2020, at Central Reformed Church in Oskaloosa with Reverend Jon Nelson officiating. This service can be viewed at livestream.com/centralreformed. A family prayer service will be held 10:15 a.m. in the church fellowship hall. The family requests all those who attend the service to please wear a mask. A private burial will be in Evergreen Cemetery. Visitation will be held from 10 a.m. to 7 p.m., Thursday at Langkamp Funeral Chapel. No family visitation has been scheduled. Memorial contributions can be made to the Central Reformed Church or the Alzheimer's Association.

The family of Jim Overbergen created this Life Tributes page to make it easy to share your memories.

Send flowers to the Overbergen family.