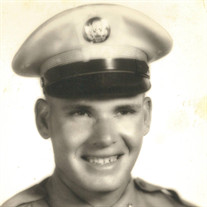 Jimmie McCabe, 88, of Oskaloosa passed away Friday, July 19, 2019, at the Mahaska Health Hospice Serenity House in Oskaloosa. Jimmie Darrel McCabe, son of Jesse A. "Ott" and Artie (Whitney) McCabe, was born April 25, 1931, in Avery, Oklahoma. He was a 1949 graduate of Bethel Acres High School and then started a career with a utility tree trimming business. He was soon drafted into the US. Army; after finishing basic training at Fort Chaffee, AR, he served in Korea and Vietnam. After his discharge in 1963, Jimmie returned to the tree trimming business. While working for Amco Pipeline Co. in Unionville, MO, Jimmie met his wife, Mary Jo Shriver. They married April 27, 1977, in Juarez, Mexico. Over the next 18 months, the company moved them 18 times for tree trimming work. After working and living in Oskaloosa, they decided that it was the place they wanted to call home. Jimmie was able to continue to work for utility companies trimming trees for many more years. He was a member of the V.F.W. and a former member of the American Legion. He was an avid outdoors-man; he loved animals of all kinds and enjoyed fishing. His family includes his wife, Jo; a son, Kody McCabe of Oskaloosa; a very good friend, Holly Smith and her children, Drake and Braelyn, who Jimmie thought of as grandchildren; three sisters-in-law; two brothers-in-law; many nieces and nephews; and his loyal dog, Pepper. In addition to his parents, Jimmie was preceded in death by a brother, Roy McCabe and a sister, Margie Henson. As was his wish, Jimmie’s body has been cremated. No services are planned. Langkamp Funeral Chapel & Crematory is handling his arrangements.

The family of Jimmie Darrel McCabe created this Life Tributes page to make it easy to share your memories.

Send flowers to the McCabe family.