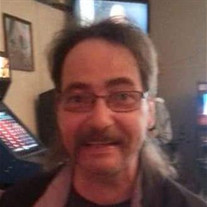 Jimmy Williamson, 54, of Oskaloosa passed away Thursday, May 24, 2018, at Mercy Medical Center in Des Moines, Iowa. James Lee Williamson, son of James Franklin and Carol Sue (Howard) Williamson, was born July 24, 1963, in Oskaloosa, Iowa. He was a 1981 graduate of Oskaloosa High School. He worked at Thomas Sanitation, Pamco, and on a road construction crew, before beginning a career as a welder at Vermeer in Pella. He retired in 2016 after 22 years with the company. Jimmy married Tamitha Hurst, and to this union, a daughter, Jaimie was born. They later divorced. On July 28, 2012, Jimmy married Rilla Elizabeth Rust. Jimmy enjoyed attending concerts, the companionship of his dog, Jed, spending time with his family and telling a good joke. He was a member of the Eagles and the Moose Lodges. His family includes his wife, Rilla Williamson of Oskaloosa; his daughter, Jaimie Williamson (Christopher Weigle) of Oskaloosa; step-sons: George (Abbey) Rust and Tyler (Maggie) Bartlow, both of Oskaloosa; four grandchildren; his mother, Carol Beason of Oskaloosa; a brother, Mark Williamson of Oskaloosa; his grandmother, Alzada Utterback of Pella; a niece, nephews, cousins, aunts and uncles. In addition to his father, he was preceded in death by step-father, Robert Beason; his grandfather, Harold Williamson; grandparents, Pat and Thelma Howard; and step-grandfathers: Roger Utterback and Frank Kaskadden. Funeral services for Jimmy will be held at 1 p.m., Tuesday, May 29, 2018, at Langkamp Funeral Chapel with Pastor Alvern Boetsma of the Good News Chapel officiating. Burial will be in Forest Cemetery. Visitation will begin at 10 a.m., Monday, at the funeral chapel; the family will be present from 2-4 p.m., Monday afternoon. Memorials may be made in his name to the family.

The family of Jimmy Williamson created this Life Tributes page to make it easy to share your memories.

Jimmy Williamson, 54, of Oskaloosa passed away Thursday, May...

Send flowers to the Williamson family.