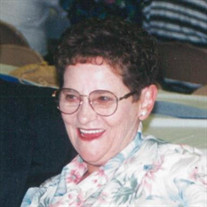 Joan Martin, 88, of Oskaloosa passed away Tuesday, October 6, 2020, at the Northern Mahaska Care Center. Joan Marie (Netz) Vroegh Martin, daughter of Fred John and Clara Olga (Johnson) Netz, was born, June 20, 1932, in Chicago, IL. In 1947, the family moved to rural Eddyville, Iowa. Joan was a 1952 graduate of Eddyville High School. December 4, 1952, Joan was united in marriage to Bert C. Vroegh in Eddyville. They made their home in rural Eddyville, and this union was blessed with four children. In 1970, Joan went back to school at Indian Hills Community College, where she took clerical courses. She initially worked as a secretary in Oskaloosa at Farm Bureau and then in Ottumwa at two dairies before Allied Gas and Chemical hired her in 1981; she worked there for 15 years. She later took a secretarial position at Kid’s Corner Child Care Center; she worked there for ten years, retiring in 2008. In 1990, Joan and Bert moved to Oskaloosa. Bert passed away on February 19, 1991. Joan was blessed with love for a second time when she married Francis Martin, April 23, 1994. Joan was an avid reader, and she treasured the time she spent with her family. Her family includes her four children: Fred (Millie) Vroegh of Eldon, Dale (Vickie) Vroegh of Eddyville, Nancine Vroegh of Belle Plaine, and Bruce (Kellie) Vroegh of Eddyville; four step-children: Linzy (Hazel) Martin, Pat (Mary) Martin, Tom Martin, and Teri (Rick) Crombaugh; nine grandchildren: Gary, Grant, Dustin, Guthry and Zachary Vroegh, Levi Patterson and Alisha Welsh, Amanda Brink and Jamie Vroegh; many step-grandchildren; several great-grandchildren; a brother-in-law, Wilbur Vroegh of Oskaloosa; sister-in-law, Donna Vroegh of Eddyville; and many nieces and nephews. . In addition to her first husband, Bert of 38 years, Joan was preceded in death by her second husband of 20 years, Francis, on November 6, 2014; her parents, and a granddaughter. Funeral services for Joan will be held at 2 p.m., Friday, October 9, 2020, at Highland Cemetery near Eddyville. Visitation will be held from 10 a.m. to 5 p.m. on Thursday. Memorial contributions can be made to Oskaloosa Senior Center or to Mahaska Health Hospice Services. According to the rules put in place by the Iowa Department of Public Health, proper social distancing and appropriate personal protective equipment are advised for attending this public event. The service will be available to view on the Langkamp Funeral Chapel’s YouTube channel Saturday morning for those unable to attend the ceremony.

The family of Joan Vroegh Martin created this Life Tributes page to make it easy to share your memories.

Send flowers to the Martin family.