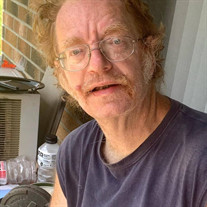 John Carter, 51, of Oskaloosa, passed away Saturday morning, December 19, 2020, at MercyOne Medical Center in Des Moines, Iowa. John Dale Carter, son of Wayne Earl and Janie (Kuder) Carter, was born January 26, 1969, at Scott Air Force Base, Illinois. After his father was deployed overseas, he and his mother moved to Van Meter, where he spent his early childhood. The family lived in Adel, Grimes, and New Sharon, before settling in Oskaloosa. He was a 1988 graduate of Oskaloosa High School, where he played clarinet in the Band. Shortly after high school, he started his life-long career as a short-order cook, initially at Happy Chef and subsequently at Donna’s, Wes’s Café, Taso’s Steakhouse, and lastly at Hy-Vee, where he worked as a cook and a custodian. John married Angela Wallace in December of 1998; to this union, two children were born. John enjoyed a few years at home as a stay-at-home dad and then enrolled in Indian Hills Community College, where he earned an Associate Degree in Computer Science. In his spare time, John enjoyed playing video games and listening to heavy metal rock music. His family will remember him as a good dad that always put his family first. His family includes his daughter, Samantha Carter of Des Moines; his son, Cody Carter of Oskaloosa; a step-son, Justin Grams of Oskaloosa; his mother, Janie Tordsen of Rose Hill; his father, Wayne Carter of Gulf Port, MS; a sister, Penni (Craig) Winegar of Rose Hill; his maternal grandmother, Mildred Kuder of Oskaloosa; five nieces and two nephews; a maternal uncle, Bob (Michelle) Kuder; and a cousin, Keith Kuder of Oskaloosa. John was preceded in death by his step-father, Robert Tordsen. As was his wish, John’s body has been cremated. Memorial services will be held at a later date. Memorial contributions can be made to his family in care of Langkamp Funeral Chapel and Crematory.

The family of John Carter created this Life Tributes page to make it easy to share your memories.

Send flowers to the Carter family.