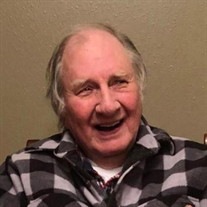 John Edgren, 85, of Oskaloosa, passed away Friday, November 19, 2021, at the Monroe County Hospital in Albia, Iowa. John Hoover Edgren, son of John G. Edgren and Anna Marie (Hoover) Edgren, was born February 5, 1936, at his grandparent’s home in Oskaloosa, Iowa. He lived most of his life in the house that his great-grandfather built near Oskaloosa. He farmed the land adjacent to the house and other farmlands. He married Joan Spangler in December 1956, and to that union, three children were born, Lucinda, David, and Erik. They later divorced. He was a farmer, a pilot, a sailor, a motorcyclist, and an adventurer. He obtained his private pilot’s license in 1955 and subsequently restored an airplane in the upstairs of his farmhouse. He obtained a commercial pilot’s license and ran an air taxi business. His love of flying and adventure took him from Canada to Venezuela. Grit was one of John’s most outstanding qualities. Although he suffered from ill health for much of his life, his belief in hard work and his thirst for adventure kept him following his dreams. Later in life, he followed another dream and bought a sailboat. He took it to Florida but primarily sailed around Lake Rathbun. John was a man of strong convictions. He believed in fairness and equality. He was willing to take unpopular political stands and was an early proponent of civil rights. John was a father, a son, a brother, a grandfather, and a great-grandfather and those left to cherish his memory are his children, Lucinda (Mike) Edgren-Gebhardt of Bloomington, and Erik (Stephanie) Edgren of Oskaloosa; five grandchildren, Paul (Courtney) Gebhardt of Bloomington, Hans Gebhardt of Bloomington, Miriam (Daniel) Troutner of Dubuque, Joel (Kristin) Gebhardt of Bloomington, and John Edgren of Oskaloosa; and four great-grandchildren, Charlotte, Ava, Rowen, and Vaughn. He was preceded in death by his parents, his brother Clifford Edgren and his infant son. Funeral Services for John will be held at 10 a.m., Wednesday, November 24, at Langkamp Funeral Chapel & Crematory, with Pastor Mike Townsley officiating. His body will be cremated following the service, and a portion of his ashes will be aerial spread; his remaining ashes will be interred at Bloomfield Cemetery at a later date. Visitation will begin at 11 a.m. Tuesday at the funeral chapel, the family will greet visitors from 4-6 p.m.

The family of John Edgren created this Life Tributes page to make it easy to share your memories.

Send flowers to the Edgren family.