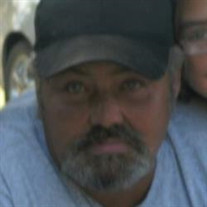 John Edward Gabel, 62, of of Oskaloosa, Iowa passed away at the Mahaska Health Partnership in Oskaloosa, Iowa on Wednesday, January 3, 2018. John Edward Gabel, son of Willis and Ramona Gabel, was born on January 9, 1955, in Oskaloosa, Iowa. In 1960 John’s family moved to Hedrick, where they farmed and then to Eddyville and Beacon where they also farmed. In 1969 John’s parents traded the farm for a taxi cab company which he helped run until 1992. John attended Oskaloosa High School and then went to Job Corp and studied to be a mechanic. In December of 1973, John married Arlie Wells. To this union, three daughters were born. They later divorced. On April 15, 1987, John married Martha Hatley and 4 more children came into his life. John went to work for Vermeer Manufacturing. He also worked for the City of Pella, Oskaloosa and the recycling center in Oskaloosa. His main calling was to be a mechanic. He operated a mechanic shop from his home. John was a member of the Eagles. He loved working on cars and watching westerns. He was a great cook and baker, but his true passion was his family. He loved spending time with his family, especially his grandchildren. John’s family includes his wife Martha, of Oskaloosa, IA, his six daughters; Tonya (Mike) DenHartog, Tina Allen, Twyla Gabel, Wendy Hatley, all of Oskaloosa, Carey (Jeremy) Dannels, of Rose Hill, IA, Amy (Josh) Spriggs of Greenfield, MO, his son, John Hatley and Christine Wagler of Oskaloosa, 15 grandchildren, 5 great-grandchildren and two brothers Jack and Jeff Gabel of Oskaloosa. Besides his parents John was preceded in death by an infant son, Jim Gabel and a sister Jeannie Van Ekeren. Memorials services will be held at 2:00 p.m., Saturday, January 6, 2018 at the Langkamp Funeral Chapel. Visitation will began at 1:00 p.m. until service time. Burial will follow at the Old White Cemetery. As was his wishes, John’s body has been cremated. Memorials may be made in his name.

The family of John Edward Gabel created this Life Tributes page to make it easy to share your memories.

John Edward Gabel, 62, of of Oskaloosa, Iowa passed away at the...

Send flowers to the Gabel family.