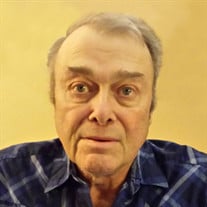 John W. Hoyt, 68, of Knoxville passed away early Thursday morning, August 9, 2018, at his home near Knoxville. John Wayne Hoyt, the oldest of five children born to Vernon Walter and Lucille Leota (Winegardner) Hoyt, was born May 10, 1950, in Oskaloosa, Iowa. John was raised in Oskaloosa and was a 1969 graduate of Oskaloosa High School. From an early age, John loved the out-of-doors and his many pets. He spent every moment he could on his grandparents’ farms and after finishing his education he began working with his grandfather. He loved the land and raised many animals including goats, sheep and most recently cattle. Family was very important to John and he loved involving his extended family and friends in the farming operations. He planted many acres of pumpkins and melons, which all needed to be harvested and cleaned before they could be sold at several area farmers markets. John served in the Army National Guard from 1970 to 1975. He married Kay Wittich in 1972 in Des Moines. He thought of her children as his own. They later divorced. His family include his mother, Lucille L. Hoyt of Oskaloosa; his siblings: Phyllis (Darrell) Swim of Oskaloosa, Walter L. Hoyt of Oskaloosa, Dee (Vance) Beyer of Otley and Darlene Hoyt of Oskaloosa; a niece, Sonya (Darren) Boot of Otley; a nephew, Chad (Jennifer) Beyer of Monroe; and great-nephews and great- nieces: Ryan Steenhoek, Ian Beyer, and Deacon, Savannah and Devon Boot. He is also survived by step-children: Rob Beal of Mount Pleasant and Glenys Beal of Knoxville; five step-grandchildren and numerous step-great-grandchildren. In addition to his father, John was preceded in death by a great-niece, Shaeleigh Boot. Funeral services for John will be held at 10:30 a.m., Monday, August 13, 2018, at Langkamp Funeral Chapel with Rev. Brice Hoyt of the Traer United Presbyterian Church officiating. Burial will be in Henness Cemetery. Visitation will begin at 11 a.m. Sunday; the family will greet visitors from 2-4 p.m., Sunday afternoon. Memorials can be made to Wesley Life Hospice of Pella.

The family of John Wayne Hoyt created this Life Tributes page to make it easy to share your memories.

Send flowers to the Hoyt family.