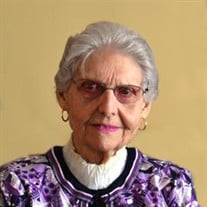 Joyce Brandriff, 85, of Oskaloosa passed away Thursday, January 3, 2019, at the Mahaska Health Serenity House in Oskaloosa. Joyce Elaine Brandriff, daughter of Samuel Lemon and Mildred Winfred (Dugdale) Vittitoe, was born August 15, 1933, in Missouri Valley, Iowa. She was a 1951 graduate of Modale High School in Harrison County, Iowa. She continued her education at a beauty school in Omaha and then in Council Bluffs, which enabled her to practice in Iowa. Joyce married James Edward Brandriff, July 27, 1952, at the Modale United Methodist Church. They settled in Missouri Valley, and Joyce worked as a beautician there for two years. In 1955, the couple moved to Des Moines, where Joyce continued her career as a beautician. After Jim graduated barber school in Des Moines, the couple moved to Oskaloosa in October 1955. At that time, Joyce became a stay-at home mom to raise their son. Joyce was a member of the First Christian Church in Oskaloosa where she enjoyed many activities and friends. Joyce also enjoyed golfing with her friends and family. Her family includes her husband of 66 years, Jim of Oskaloosa and a son, Scott Alan Brandriff, also of Oskaloosa. In addition to her parents, she was preceded in death by a brother and sister-in-law, Frank Arthur and Margaret Vittitoe; a sister and brother-in-law, Velma Arlene and Paul Blakley; a sister-in-law, Emma Jane Brandriff; and a niece, Annette (Vittitoe) Berney. Funeral Services for Joyce will be held at 10:30 a.m., Tuesday, January 8, 2019, at the First Christian Church in Oskaloosa with Rev. Molly Goodrich officiating. Burial will be in Forest Cemetery. Visitation will begin after 11 a.m., Monday, at Langkamp Funeral Chapel; the family will greet visitors from 4 -6 p.m., Monday evening. Memorial contributions may be made to the First Christian Church.

The family of Joyce Elaine Brandriff created this Life Tributes page to make it easy to share your memories.

Send flowers to the Brandriff family.