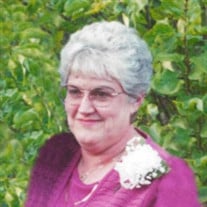 Joyce Rodwell, 77 of Oskaloosa passed away Monday, May 25, 2020, at Mahaska Health in Oskaloosa. Joyce Ann Rodwell, daughter of Gerritt and Marguerite (Wallace) Dykstra, was born February 19, 1943, in Oskaloosa, Iowa. She was a 1961 graduate of Oskaloosa High School. In 1962, she moved to Des Moines where she was employed by Employees Mutual Casualty Insurance Company. She returned to Oskaloosa later that year and began working as an insurance clerk for Dr. Robert Collison, Dr. Sidney Smith, and Dr. Norval Saxton. Joyce continued her career with Family Medical Center until her retirement as insurance supervisor in 2005. Joyce married John Rodwell on September 4, 1965 at St. Mary’s Catholic Church in Oskaloosa. In September 1971, they moved into the former Congregational Church in Givin, a small hamlet in East Des Moines Township, Mahaska County. Through the years, Joyce and John enjoyed converting it into their home. Joyce enjoyed living in the country where she treasured the companionship of numerous cats and dogs. She and John also enjoyed fishing, camping and listening to country music. Joyce is survived by her husband, John of Oskaloosa; a sister, Janice Maxson of Lyndon, IL; a nephew, Jeff (Debbie) Maxson of Morrison, IL; and nieces: Julie Crandall (Faye O’Daniel) of Orange Park, FL and Jennifer (George) Paris of Clayton, NC; a brother-in-law: Robert “Bob” Rodwell of Givin; two nephews: Doug (Denise) Rodwell of Oskaloosa, and Michael (Amy) Rodwell of Givin; several great-nieces and nephews. Joyce was preceded in death by her parents. Private graveside funeral services will be held at Henness Cemetery. Open visitation will be held from 11 a.m. to 6 p.m., Thursday at Langkamp Funeral Chapel with a restriction of 10 persons in the building at any given time. Due to COVID-19 precautions, the family will not be greeting visitors. Memorial contributions can be given to the Mahaska Health Auxiliary.

Joyce Rodwell, 77 of Oskaloosa passed away Monday, May 25, 2020, at Mahaska Health in Oskaloosa. Joyce Ann Rodwell, daughter of Gerritt and Marguerite (Wallace) Dykstra, was born February 19, 1943, in Oskaloosa, Iowa. She was a 1961 graduate... View Obituary & Service Information

The family of Joyce Rodwell created this Life Tributes page to make it easy to share your memories.

Send flowers to the Rodwell family.