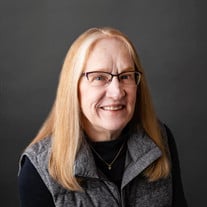 Joyce Ann Wymore, 68, of Ames and formerly of Oskaloosa, passed away January 25, 2020, at her home in Ames, Iowa. Joyce was born December 5, 1952 in Ottumwa, IA to Lester Dean “Red” and Helen Louise (Warnock) Snowbarger. The family later moved to Oskaloosa, Iowa with her younger brother Ron. She met her high school sweetheart Lee in high school band, and graduated from Oskaloosa High School with the class of 1971. Joyce then attended the University of Northern Colorado, and for a year Lee wrote her a letter every single day until he joined her in Colorado for college. She graduated with a bachelor’s degree in Preschool Education in 1975. Joyce was united in marriage to Lee Allen Wymore on August 9, 1975 in Oskaloosa, Iowa. Joyce and Lee lived in Fort Collins, CO, where she taught preschool at the Loveland Day Care Center from 1975 to 1978. They then lived in Ithaca, NY, and Montreal, Quebec, Canada, where she focused on raising their two children, Meghan and Mathew. In 1990 the family moved back to Oskaloosa and she taught at the Mahaska County YMCA preschool. Joyce then served as librarian and then secretary at Webster Elementary, and then Oskaloosa Elementary until her retirement in 2012. After their children settled in Ames, Joyce and Lee followed them and Joyce oversaw the remodeling of their “Ames” home. In her youth, Joyce played oboe in the band and served as Worthy Advisor in Rainbow Assembly No. 171. Later she spent many years as a Girl Scout Troop Leader. She was active with the Oskaloosa High School Class of 1971, helping plan many reunions. Joyce enjoyed the company of her “girlfriends” and Bunco nights. She loved traveling with friends and family around the United States (especially Arizona) and Europe. Joyce also enjoyed camping trips, particularly to Poudre Canyon, CO, where she and Lee began camping in college and returned many times. Yet her real passion was her family, and becoming a “Mimi” to her beloved grandsons Henry and Alex was her greatest joy in life. She very much anticipated the upcoming arrival of grandchild #3. Joyce is survived by her husband of 45 years, Lee of Ames, her daughter Meghan (Jonathan Brand) Wymore Brand of Ames, her son Mathew (Megan Henson) Wymore of Ames, her two grandsons Henry and Alexander Brand, grandchild Wymore-Henson “on the way,” her brother Ron (Jackie) Snowbarger of Hiawatha, IA and three nieces, Jennifer Comfort, Elizabeth McBurney, and Jessica Snowbarger. Joyce was preceded in death by her parents and her sister-in-law Carol Snowbarger. Memorials can be given to Mahaska Health Foundation (with a memo to the Infusion Center). As she received treatment for her endometrial cancer, she very much appreciated the care and support she received from the infusion nurses and other staff at the Oskaloosa Cancer Care and Infusion Center and the Mercy One Cancer Center in Des Moines. She grew to see these dedicated professionals as friends. A private family memorial service will be held. Langkamp Funeral Chapel & Crematory has been entrusted with Joyce's arrangements.

The family of Joyce Wymore created this Life Tributes page to make it easy to share your memories.

Joyce Ann Wymore, 68, of Ames and formerly of Oskaloosa, passed...

Send flowers to the Wymore family.