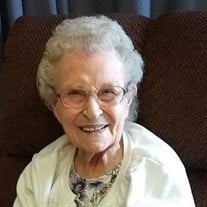 Juanita Naylor, age 102 of Johnston, Iowa passed away Tuesday, February 4, 2020 at the Bishop Drum Care Center in Johnston, Iowa. Juanieta Naylor, daughter of Charles H. and Ora (Utterbach) Hicklin, was born on February 2, 1918, in Oskaloosa, Iowa. Juanieta was a 1936 graduate of Oskaloosa High School. On July 4, 1936, she eloped to marry her high school sweetheart, Walter Naylor, at Unionville, Missouri. They made their home in Oskaloosa and Juanieta stayed busy raising her five children. Juanieta was a 70 year member of T.T.T. and a lifelong member of the First Christian Church of Oskaloosa where she was baptized in the church as a young child. The past 21 years she enjoyed a joint membership in the West Des Moines Christian Church. She and Walter supported and volunteered for World Missions through their marriage; in the 70s and early 80s, they traveled to Honduras, South America and Africa delivering audio scripture to many indigenous people. They also delivered extended physical and spiritual support to missionary staff and their mission goals. During the 90s, they spent winters volunteering at the Southwest Indian School in Arizona. Juanieta’s family includes her children and their spouses: Larry (Maxine) Naylor of Oskaloosa, IA, Sherry (Daniel) Baze of Johnston, IA, and Patricia Montgomery of Lexington, KY. She is also survived by eleven grandchildren, 17 great-grandchildren and 8 great-great-grandchildren. In addition to her parents, Juanieta was preceded in death by her husband of 63 years, Walter on December 26, 1999, a son, Mike Naylor and a daughter, Yolanda Naylor. Funeral services will be held at 10 a.m., Friday, February 7 at First Christian Church, Oskaloosa, Iowa with Reverend Randy Ehrhardt of West Des Moines Christian Church officiating. The family will greet visitors from 9:30 a.m. until service time at First Christian Church on Friday morning. Private family burial will be in Forest Cemetery. In lieu of flowers, the family asks you to make memorial contributions to World Gospel Missions or your favorite charity.

The family of Juanieta Naylor created this Life Tributes page to make it easy to share your memories.

Send flowers to the Naylor family.