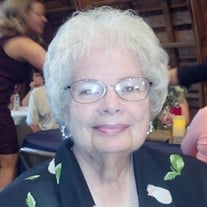 Julie DeReus, 76, of Ames, Iowa passed away unexpectedly Sunday, March 4, 2018, at her home in Ames. Julie Ann DeReus, daughter of Claude Gordon and Frances LaRue (Vermillion) Wells, was born September 27, 1941, in Oskaloosa, Iowa. Julie was a 1959 graduate of Oskaloosa High School. That same year she married Jimmy DeReus, and they made their home in University Park. Julie and Jimmy were the parents of three children, and they later divorced. The family moved to Eagan, Minnesota in 1969 and to Ames, Iowa in 1978. Julie held a variety of jobs over the years but worked primarily as a bookkeeper for the accounting firm of Allen L. Kockler Co. in Nevada, Iowa. In her later years, she worked at Cub Foods in Ames as a clerk. Julie enjoyed bowling her entire life, in Oskaloosa and later in Ames. Her family and friends enjoyed the many knitted items she made for them. Julie’s life was devoted to her children, grandchildren, and great-grandchildren, she treasured the times they could be together. Her family includes her mother, Frances Wells Picken of Oskaloosa; children: Jo Dee (Russ) Amundson of Ames, IA; James Shawn (Laurie) DeReus of Palmetto, GA, and Jon Richard DeReus of Ankeny, IA; six grandchildren and five great-grandchildren; a sister, Sue Ellen Wells of Milwaukee, WI; and a dear friend, Jim. Julie was preceded in death by her father, Claude. A private family funeral service will be held at Langkamp Funeral Chapel in Oskaloosa. Interment will be in Forest Cemetery. Memorial contributions can be made to On with Life rehabilitation center in Ankeny, Iowa.

The family of Julie Ann DeReus created this Life Tributes page to make it easy to share your memories.

Send flowers to the DeReus family.