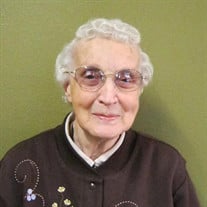 Junella Hoksbergen, 89, of Oskaloosa, passed away Thursday, January 25, 2018, at Crystal Heights Care Center in Oskaloosa. Junella Hoksbergen, daughter of Gerrit and Emma (Ryken) Nieuwsma, was born, May 30, 1928, at the rural home of her parents west of Peoria, Iowa. She graduated from eighth grade at the Peoria Christian School. Junella met her future husband, Albert James Hoksbergen, on the Pella square after church on a Sunday evening. They married, February 3, 1948, at the First Christian Reformed Church in Oskaloosa. They settled on a farm four miles west of Tracy, Iowa. After Albert suffered a heart attack in 1972, they moved to a nearby farm. In addition to raising her five children, Junella was a true partner to her husband in the farming operation; she assisted with everything from the milking to the chickens and the hogs. She was a loving mother, grandma, and homemaker in every sense of the word; a talented seamstress, gardener, and preserver of produce, putting delicious food on the table three meals a day plus coffeetime – sometimes in the field. In 2003, she left the farm and moved to Spring Creek Village. While on the farm, she was a member of Bethel Homemakers, a neighborhood club. In her later years, Junella enjoyed flower gardening and quilting with her church group at First Christian Reformed Church; she attended Coffee Break Bible study at the church for many years. Her family includes her children: Kenneth (June) Hoksbergen of Pella, Gloria (Eugene) Eveland of Oskaloosa, Carroll (Kathy) Hoksbergen of Tracy, and Dean (Carol) Hoksbergen of Oskaloosa; a son-in-law and his wife, Bill (Lois) Van Weelden of Oskaloosa; fourteen grandchildren; and 40 great-grandchildren. She is also survived by three sisters: Anna Vande Wall of Oskaloosa, Wilma Van Weelden of Oskaloosa, and Elinor Rowland of Fort Dodge and two sisters-in-law: Junella Crake of Grandville, MI and Kathryn Kelderman of Boulder, CO. In addition to her parents, she was preceded in death by her husband, Albert on December 27, 1993, a daughter, Gail Van Weelden, a brother, Henry Nieuwsma, and a sister, Gretta Van Wyk. Funeral Services for Junella will be held at 10:30 a.m., Monday, January 29, 2018, at the First Christian Reformed Church with Rev. John Jakes of Calvary Bible Church in Indianola officiating. A Family Prayer service will be held at 10:15 a.m. in the church’s lower level. Burial will be in Forest Cemetery. Visitation will begin at 10 a.m. at Langkamp Funeral Chapel; the family will greet visitors from 2-4 p.m., Sunday afternoon. Memorials can be made to the Pella Christian Grade School or The Back to God Hour. Memories and condolences can be sent to the family by visiting langkampfuneralchapel.com.

Junella Hoksbergen, 89, of Oskaloosa, passed away Thursday, January 25, 2018, at Crystal Heights Care Center in Oskaloosa. Junella Hoksbergen, daughter of Gerrit and Emma (Ryken) Nieuwsma, was born, May 30, 1928, at the rural home of her parents... View Obituary & Service Information

The family of Junella Hoksbergen created this Life Tributes page to make it easy to share your memories.

Send flowers to the Hoksbergen family.