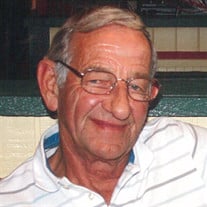 Junior Van Roekel, 80, of Oskaloosa, passed away Saturday evening, September 8, 2018, at the Mahaska Health Partnership Hospice Serenity House in Oskaloosa. Otto Junior Van Roekel, son of Otto Henry and Caroline (Van Hulzen) Van Roekel, was born January 17, 1938, in Oskaloosa, Iowa. Junior attended grade school in Rose Hill and was a 1956 graduate of Oskaloosa High School. His first job was with Wake Feed Mill where he worked for several years. He was later hired by Binns and Stevens and worked as a foreman for 26 years. In 1991, he went to work for Oskaloosa Food Products as the transportation supervisor/foreman. He retired from full-time employment in 2012 but continued to work part-time at Osky Food until a month prior to his death. Junior married the love-of-his-life, Cecelia Reese, on July 4, 1961, at the Central United Methodist Church Chapel in Oskaloosa. They raised their family in Oskaloosa and Junior was a member of Central Reformed Church for over 60 years. Family was always Junior’s first priority, he was truly a giving and loving husband, father, grandfather, brother, uncle, and friend; and showed his love and kindness through his actions. He was a man of deep faith, and though he was a man of few words, his convictions were very evident in his service to others. Junior was also a member of the Oskaloosa Indians Booster Club and the Babe Ruth Board of Directors; he loved cheering on his grandchildren in their sporting events. Junior had the ability to fix anything and loved tinkering on his cars. He enjoyed the out-of-doors and working in his yard; he had a meticulous way about him that was apparent in his vehicles, yard, and home. Junior also enjoyed the many friendships at his coffee group. Junior’s family includes his wife of 57 years, Cecelia; his children: Scott and Wendy Van Roekel of Oskaloosa and Shari Day, also of Oskaloosa; grandchildren: Justin (Danielle) Day and Jacey and Jaden Van Roekel; great-grandchildren: Jeren and Jordan Day. He is also survived by his siblings, Wayne Van Roekel of Oskaloosa, Joleen (Bob) Van Arkel-Peterson, and Lois Van Arkel-Alexander; a special brother-in-law, Jerry (Ramona) Reese; and special nieces: Kathy Walker, Susie Walker-Milburn, Beth Walker-Brown, and many other special nieces and nephews. In addition to his parents, Junior was preceded in death by his step-mother, Artie Van Arkel-Van Roekel; his brother, John A Van Roekel; a sister, Dorothy Van Roekel-DeGroot; his wife’s parents, David E. and Agnes Reese; sisters-in-law: Donna Reese-Bambrook, Diana Reese-(Karl) Walker-(Jack) Stout, and Shirley Reese-Cubit; and brother-in-law, Davey Reese. Funeral Services for Junior will be held at 10:30 a.m., Wednesday, September 12, at the Central Reformed Church with Rev. Jon Nelson officiating. A family prayer service will be held at 10:15 a.m. in the church’s east lounge. Private burial will be held in Forest Cemetery. Visitation will begin after 9 a.m., Tuesday, at Langkamp Funeral Chapel & Crematory; the family will greet visitors from 5-7 p.m., Tuesday evening at the chapel. Memorials can be made to MHP Hospice Serenity House, the Oskaloosa Booster Club or Central Reformed Church.

The family of Junior Van Roekel created this Life Tributes page to make it easy to share your memories.