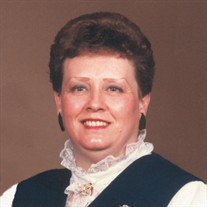 Karen Grubbs, 80, of Oskaloosa, passed away Thursday, January 27, 2022, at her home in Oskaloosa. Karen Rae Grubbs, daughter of Thelma Louise Pennington, was born June 6, 1941, in Council Bluffs, Iowa. Karen was a 1959 graduate of Council Bluffs High School and then went on to work as a cook in restaurants. Karen married Shirley Lavone Grubbs on January 31, 1970, in Council Bluffs. Soon, a quarry job near Linville for Shirley brought them to Oskaloosa. After moving, Karen continued to work in restaurants and also worked in housekeeping in several nursing homes. She and Shirley also managed an apartment complex in Oskaloosa for many years. Although Karen worked at numerous jobs outside the home, her main priority was always her family and her home. Karen was a member of the Assembly of God Church and enjoyed teaching Sunday School there. She also enjoyed flower gardening, baking wedding cakes, and all kinds of crafts. Her family includes her children: Karen Rae (Bud) Johnson of Oskaloosa, John (Tracy) Wagner of Waxhaw, N.C., and David Wagner of Missouri. She was blessed with numerous grandchildren and great-grandchildren. In addition to her husband and her mother, she was preceded in death by Elvin Heiman, a man that was like a father to her; two sons, Rusty Grubbs and Robert Wayne Musgrove; and a sister, Sharon Hardiman. Funeral Services for Karen will be held at 10 a.m., Saturday, February 5, 2022, at Langkamp Funeral Chapel, with Pastor Alvern Boetsma officiating. The Burial will be in Old White Cemetery. Shirley Grubbs’ ashes will be buried with Karen and Military Honors will be presented by the Oskaloosa Honor Guard. Visitation will begin at 1 p.m., Friday; the family will greet visitors from 4-6 p.m. Memorial contributions can be made to the family.

The family of Karen Grubbs created this Life Tributes page to make it easy to share your memories.

Send flowers to the Grubbs family.