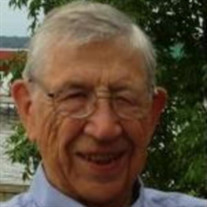 Dr. Donald Keith Campbell of Oskaloosa, Iowa, passed away peacefully at his home on Thursday, January 7, 2021. He was 94 years old. Keith was born on November 8, 1926, in Oskaloosa to Dr. Walter and Esther Campbell. He grew up in Oskaloosa with his two older brothers, Robert (Bob) Campbell and John Campbell. After graduating high school at The Webb School in Bell Buckle, Tennessee, in 1944, Keith went to DePauw University in Greencastle, Indiana, graduating in 1947. While at DePauw, he was a member of the U.S. Navy V-12 program. He went on to obtain his medical degree from the University of Iowa in 1950. On June 17, 1950, he married his wife of 70 years, Mary Frances Anderson of Avoca, Iowa. After completing his medical residency in St. Paul, Minnesota, and serving in the Army Medical Corps in Japan during the Korean War, Keith came home to Oskaloosa in 1955. He entered private practice in family medicine and general surgery with his father and other physicians at Mercy Clinic. He remained there until his retirement in 1993 after 37 years of service to the community. His retirement presents included a T-shirt emblazoned with Keith’s usual pronouncement to his nurses upon his completion of surgery: “As they say in Helsinki” on the front and “I’m Finnish” on the back. During his professional life, Keith served as President of the Iowa Clinical Surgical Society, President of the Mahaska County Medical Society, President of the Oskaloosa Chamber of Commerce. He was a Director of Mahaska State Bank and MidWestOne Bank. Keith became an instrument-rated airplane pilot and enjoyed flying his plane for many years. He loved spending time at his and Mary Fran’s Gull Lake, Minnesota vacation home, where he spent his summers after retirement. This included fishing, sailing, walks with his dogs, card games, bike rides, and many wonderful times with visiting family and friends. Keith also was a devoted fan of the Iowa Hawkeyes. Keith is survived by his loving wife, Mary Fran; by his children: Scott (Kym Life) Campbell of Oskaloosa, Betsy (Joel) Maguire of Niwot, CO, Martha (Art) Winsky of Kimbell, SD, and Molly (Pete Reiwer) Fortney of Fargo, ND; by his grandchildren: Aaron Winsky of Boulder, CO, Tyler (Kristin) Winsky of Lino Lakes, MN, Bryson (Amy) Winsky of Dubuque, IA, Tim (Hannah) Maguire of Lafayette, CA, Callie (Vince) LoPresti of San Anselmo, CA, Hiatt Campbell of Seattle, WA, and River Campbell, a student in Boulder, CO; and by his great-grandchildren: Addelyn, Carson, and Nora Winsky, Walter and Callen Winsky, Campbell and Barron LoPresti, and Linden Maguire. Keith was preceded in death by his parents and by his brothers. Keith’s family, including his brothers’ sons and daughters who grew up in Oskaloosa, were very important to him. He also treasured his lifelong Oskaloosa friends. Memorial donations may be made to the Mahaska Community Recreation Foundation and Mahaska County Conservation Board. As was his wish, Keith’s body has been cremated. Memorial services will be held at a later date. Langkamp Funeral Chapel & Crematory is handling Keith’s final arrangements.

Dr. Donald Keith Campbell of Oskaloosa, Iowa, passed away peacefully at his home on Thursday, January 7, 2021. He was 94 years old. Keith was born on November 8, 1926, in Oskaloosa to Dr. Walter and Esther Campbell. He grew up in Oskaloosa... View Obituary & Service Information

The family of Dr. Keith Campbell MD created this Life Tributes page to make it easy to share your memories.

Send flowers to the Campbell family.