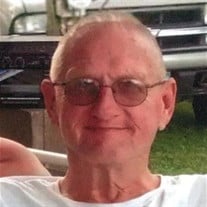 Ken Beyer, 69, of Oskaloosa passed away Tuesday afternoon, June 5, 2018, at the Mahaska Health Partnership in Oskaloosa. Kenneth Duane Beyer, son of Melvin and Leona Valster Beyer, was born August 1, 1948, in Oskaloosa. He was a 1966 graduate of Oskaloosa High School. He married Joyce Elaine Zimmer on February 14, 1970, at the home of her parents in Randolph, Wisconsin. Working as a paper carrier was Ken’s first job. After he returned from the Army in 1970, he was employed at Harry Green’s store, Timber Frame, Clow Valve Company, Dugger Construction and Vermeer Manufacturing in Pella, where he worked on the assembly line for 13 ½ years. Following his retirement, Ken went to work for K & B Auto and Jarvis Construction where he was Justin and Rick’s right-hand man. Ken was a member of The Good News Chapel. In his spare time, he enjoyed traveling, car races, playing cards, fishing, and campfires at his favorite spot on the Des Moines River near Chillicothe. Ken’s family includes his two sons: David Beyer of Pella and Daryl (Billie) Beyer of Oskaloosa; and three grandchildren: Brandon Beyer of Pella and Elizabeth Graham and Lacy Beyer of Oskaloosa. Besides his parents, Ken was preceded in death by his wife, Joyce; a brother, Keith Beyer; and two sisters: Susan Long and Betty Dorland. Funeral service for Ken will be held at 1:30 p.m., Saturday, June 9, 2018, at Langkamp Funeral Chapel in Oskaloosa with Pastor Alvern Boetsma officiating. As was his wish, Ken’s body will be cremated following the service. Visitation will begin at 11 a.m., Friday, at the funeral chapel; the family will greet visitors from 5-7 p.m. Memorials can be made to the Good News Chapel.

Ken Beyer, 69, of Oskaloosa passed away Tuesday afternoon, June 5, 2018, at the Mahaska Health Partnership in Oskaloosa. Kenneth Duane Beyer, son of Melvin and Leona Valster Beyer, was born August 1, 1948, in Oskaloosa. He was a 1966 graduate... View Obituary & Service Information

The family of Kenneth D. Beyer created this Life Tributes page to make it easy to share your memories.

Send flowers to the Beyer family.