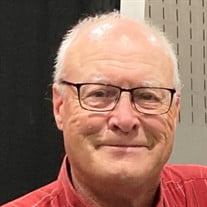 Kenneth Van Mersbergen, 70, of Oskaloosa, passed away Monday, October 18, 2021, at Mahaska Health in Oskaloosa. Kenneth Eugene Van Mersbergen, son of Lawrence and Anna (Boot) Van Mersbergen, was born October 23, 1950, in Oskaloosa. He was a 1968 Oskaloosa High School graduate. December 28, 1968, he married his high school sweetheart, Donna Lathrop, at the First Presbyterian Church. On July 25, 1969, he entered the Army and served four months and then was released to the Army National Guard to complete his service. He returned to Oskaloosa and began working at Mid-American Energy. He initially worked with the electrical side of the company, but after several years, he switched to the natural gas side, where he served as a gas serviceman. His career with Mid-American spanned over 40 years. Ken loved being active outdoors. Fishing, walking, biking, and woodworking were some of his favorite activities, but any event involving his grandchildren was always his preference. Ken volunteered at the hospital and was a member of the American Legion. He was also a member of the First Presbyterian Church where he served as an elder and deacon. His family includes his wife, Donna of Oskaloosa; his children: Jenny Braundmeier of Oskaloosa, Tim Van Mersbergen of Tampa, FL, Philip (Shanna) Van Mersbergen of Ankeny, IA, and Vahn Baccam of Indianapolis, IN; his grandchildren: Elizabeth, Paige, Spencer, and Faith Van Mersbergen, Samantha, Abby, and Holden Braundmeier, and Anna Van Mersbergen; and his siblings: Eleanor (John) Komdeur of Gainesville, FL, Sheryl (Dan) Riemersma of Worthington, MN, Don (Rita) Lathrop of Durango, CO, Pat (Paul) Wainwright of Durango, Co, and Pam Werner of Oskaloosa. In addition to his parents, he was preceded in death by his mother-in-law and father-in-law, Donald and Betty Lathrop, and a son-in-law, Kyle Braundmeier. A private graveside funeral service will be held at Henness Cemetery. Visitation will begin at 11 a.m., Thursday at Langkamp Funeral Chapel; the family will greet visitors from 4-6 p.m. Thursday evening. Memorials can be made to Hope Lodge at the University of Iowa.

The family of Kenneth Van Mersbergen created this Life Tributes page to make it easy to share your memories.