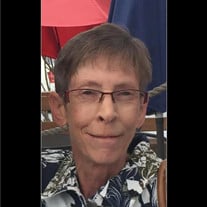 Karen Dee “Kerry” Mathew Heaton died May 28, 2020, at her home near Robertsdale, Ala., after an-18 month struggle with cancer. She was 65. She dealt with her illness with a positive outlook and great sense of humor. Kerry was born April 14, 1955, in Oskaloosa, Iowa, the daughter of James F. and Betty L. Mathew. She was a 1973 graduate of Oskaloosa High School where she participated in many activities, especially theatre and vocal music. She attended the University of Missouri where she was a member of the Alpha Phi sorority and then attended William Penn College from which she graduated in 1977. Kerry married Carl Lee Heaton in Oskaloosa on August 19, 1978. They lived in Oskaloosa for a number of years where she worked for APAC telemarketing firm and then moved to Rochester, Minnesoa area after she completed training as a physical therapist assistant for many years. Upon her retirement in 2017, she and Lee began traveling in their RV and spent winters in southern Alabama. They also spent summers in Minnesota state parks where she and Lee were campground hosts. Kerry enjoyed Broadway musicals and especially joining her mother on a trip to see Broadway musicals and Ellis Island in New York City. She also loved to read fictional novels and solve jigsaw puzzles. Kerry is survived by her husband, Lee Heaton; her son, C.J. Heaton and his wife, Jessica, of Omaha, Neb.; her daughter, Katie Kilburg and her boyfriend, Ryan Freeman, of Long Lake, Minn.; Steve Heaton and his wife, Kendra, of Oskaloosa; Cara and her fiancé, Todd Sage, of Oskaloosa; her grandchildren, Abby Heaton, Reed Heaton and Grant Heaton of Omaha and Jesse Kilburg of Long Lake, Minn. Amanda Jones (Jacob), Alex Heaton (Andrea), and Lake Heaton, of Oskaloosa, Arik Sille, and Mikayla Adkins (Bret), of Oskaloosa, and 7 great-grandchildren; her brother, John Mathew and his partner Stephen DePenna of Webb Lake, Wis., and her sister, Julie Mulford and her husband Ron Mulford of Taylors Falls, Minn. She was preceded in death by her parents, James F. and Betty L. Mathew, and a grandson Jordan Heaton. Her remains will be cremated as per her wishes. A visitation for Kerry Heaton with the family present will be held from 1 – 3 p.m., on Saturday, June 27, 2020, at Langkamp Funeral Chapel. According to the rules put in place by the Iowa Department of Public Health, proper social distancing and reasonable personal protective equipment is advised for attending this public event. Langkamp Funeral Chapel is handling Kerry’s final arrangements. In lieu of flowers or cards, the family asks that memorials be made to your local hospice or cancer awareness groups.

Karen Dee &#8220;Kerry&#8221; Mathew Heaton died May 28, 2020, at her home near Robertsdale, Ala., after an-18 month struggle with cancer. She was 65. She dealt with her illness with a positive outlook and great sense of humor. Kerry was born... View Obituary & Service Information

The family of Kerry Heaton created this Life Tributes page to make it easy to share your memories.

Send flowers to the Heaton family.