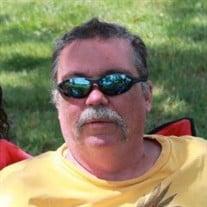 Kirk J. Montgomery, 63, of Oskaloosa, passed away Tuesday, October 5, 2021, at his home in Oskaloosa. Kirk Junior Montgomery, son of Everett and Alice (McConnell) Montgomery, was born June 25, 1958, in Iowa City, IA. Growing up, Kirk and his family lived in Kirkville, IA, and he attended Eddyville High School. After high school, Kirk attended Indian Hills Community College, where he graduated with a degree in Culinary Arts. Kirk very much enjoyed cooking and held several jobs at restaurants in and around Oskaloosa. He later began working in the manufacturing industry. One of the projects he worked on that he was particularly proud of was when he helped build the power plant in Chillicothe, IA. On December 1, 1979, Kirk was united in marriage to Veronica Hudson in Oskaloosa, Iowa. Together they had three children: Chaley, Jacob, and Ben. As Kirk continued with his career, he enjoyed employment with Superior Ideal, Oskaloosa Engineering and Manufacturing, and the City of Oskaloosa. He later began working at Vermeer Manufacturing in Pella, where he worked until his retirement in 2016. Throughout his careers, from Culinary Arts to working at Vermeer, Kirk always had a strong work ethic. Whatever he was doing, he always wanted to do it correct. Kirk was a member of the local Bass Club, where he enjoyed weekend bass tournaments. He also loved hunting, especially for deer, and was a master mushroom hunter; it was known that he could even “smell the mushrooms” and locate them based on their scent. Kirk also enjoyed gardening. He always had more than enough vegetables and enjoyed sharing them his family and friends. Watching his children and grandchildren participate in sports was something he truly loved. Kirk was always joking around and absolutely loved to get his family and friends, especially his grandkids, to laugh at him. Growing up, Kirk always wanted a Harley-Davidson motorcycle, and in 2006, he purchased one and loved giving rides to his family. Kirks family includes his wife Veronica, his three children; Chaley (Ryan) Gravett of Urbandale, IA, Jacob (Katie) Montgomery of Oskaloosa, IA, and Ben Montgomery of Chicago, IL, his six grandchildren; Aubrey and Dane Schultz and Payten and Tory Gravett all of Urbandale, IA, Aleigha and Jackson Burton of Oskaloosa, IA, three sisters, Debra Williams of Des Moines, Jeannie Poole and Susan Guyette of Oskaloosa, one brother; Everett (Stacy) Montgomery of Oskaloosa, IA, and many nieces and nephews. Kirk was preceded in death by his parents. As were Kirk’s wishes, his body will be cremated, and private family services will be held at a later date. Kirk’s ashes will be spread throughout his favorite hunting grounds. Langkamp Funeral Chapel & Crematory has been entrusted with Kirk’s final arrangements.

Kirk J. Montgomery, 63, of Oskaloosa, passed away Tuesday, October 5, 2021, at his home in Oskaloosa. Kirk Junior Montgomery, son of Everett and Alice (McConnell) Montgomery, was born June 25, 1958, in Iowa City, IA. Growing up, Kirk and his... View Obituary & Service Information

The family of Kirk J. Montgomery created this Life Tributes page to make it easy to share your memories.

Send flowers to the Montgomery family.