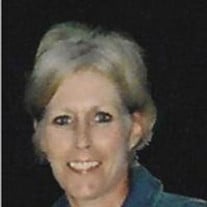 Kristi Jane Lathrop: Kristi passed away Monday evening at Mahaska Hospital in Oskaloosa at the age of 48 years, 10 months and 28 days. Her memory is honored by her husband, Rick Lathrop of Oskaloosa; four sons: Steven Landgrebe of Oskaloosa, Gary Dean and his wife, Becky Landgrebe of Ottumwa, IA, Richard Trevor and Jill Landgrebe of Sigourney, IA and Travis Landgrebe of Carroll, IA; and two daughters: Krystle Landgrebe of Oskaloosa and Angie and her husband, Nick Rhode of Muscatine, IA. She was blessed with four grandchildren: Cody and Dustin Rhode, Nick Landgrebe and Alyssa Landgrebe. She is survived by one brother, Kim and his wife, Vicki Harding of Gilbert, AZ ; one sister, Kelli and her husband, Mike McBurney of Cedar, IA; a stepmother, Bernice Harding of Eddyville; a stepbrother, Gary Tipling and his wife, Carole of Los Angeles, CA; a stepsister, Dixie Lacey of Corning, IA and many wonderful friends. Kristi Jane Lathrop, daughter of Warren and Janelle Pence Harding was born on July 17, 1955 in Mahaska County. She attended Eddyville High School and received her G.E.D. in 1976. She began working at Chamberlain Door Factory in Albia, IA; she spent 11 years at Pella Corp. in Pella, IA; In April of 1995 Kristi began working for Mahaska Diamond Shelter providing direct care, she soon became the dietary supervisor for Diamond place and held this position until 1998. At that time she assumed the site manager position for the Burlington Home for Imagine The Possibilities, where she has since worked. Kristi married Rick Lathrop on August 10, 1990 at Edmundson Park in Oskaloosa. She enjoyed planting and caring for flowers, fishing and spending time with her family. She was preceded in death by her parents. PDF Printable Version

Kristi Jane Lathrop: Kristi passed away Monday evening at Mahaska Hospital in Oskaloosa at the age of 48 years, 10 months and 28 days. Her memory is honored by her husband, Rick Lathrop of Oskaloosa; four sons: Steven Landgrebe of Oskaloosa,... View Obituary & Service Information

The family of Kristi Jane Lathrop created this Life Tributes page to make it easy to share your memories.

Send flowers to the Lathrop family.