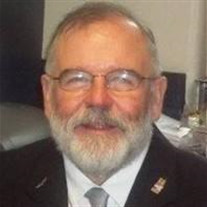 Dr. Lance Jay Edwards passed away peacefully at the MHP Serenity House Hospice in Oskaloosa, Iowa on August 3rd, 2018 at the age of 65. His journey home has come after a long battle with several cancers. Lance was born April 7th, 1953 in Whitefish, Montana, the son of Martin and Evelyn Edwards. Growing up on the Bobtail Cutoff of the Pipe Creek Road was an experience he treasured his entire life. He attended Libby schools graduating with the class of 1971. While a student at the University of Montana, Lance met his wife, Ruth Jane Boy, in 1973 at an airport in Billings, Montana over spring break. In spite of attending colleges 200 miles apart, romance blossomed, and the couple wed July 10th, 1973. Lance is survived by his cherished wife Ruth, beloved daughter Allison, grandchildren Lillian and Edwin and step-granddaughter, Jade Berry, sisters Connie and Mona, and brother, Wayne (Julie), as well as many nieces, nephews, aunts and cousins. He was preceded in death by his father, Martin, in 1982, mother, Evelyn, in 2015, and stepson, Randy Soper in 1992. Lifelong learning was a passion for Edwards. Always a student and a thirty-year Professor he earned a Doctor of Management from Colorado Tech, an MBA from the City University of Seattle, and a Master of Arts in History from AMU. An avid UM Grizzly fan he also earned Bachelor of Science and Associate of Arts degrees from the University of Montana. Beginning work as a business and accounting manager in industry, he found his calling as a professor working in and retiring from both the Montana and Colorado higher education systems. He held a tenured, full professorship in business and chair of the business administration division at William Penn University in Iowa until ill health finally forced his recent retirement. While a university student he worked summers in Libby sawmills and for two years as a smokechaser/wildland firefighter for the forest service. A dedicated reader, his interests were in history and genealogy, a hobby that traced both sides of his family as Puritan immigrants in the 1630’s. He found a true American story of many great-grandparents who founded Harvard, served as colonial governors, and others who were landless and illiterate but always pushed by the desire to move west and explore. He identified ancestors who served as generals and privates in every conflict from colonial founding to present day. Lance proudly served in and received an honorable discharge from the 120th Fighter-Interceptor Wing, Montana Air National Guard, and Reserve of the United States Air Force. As a teenager, Lance joined the Civil Air Patrol, the Auxiliary of the United States Air Force, from which he retired decades later as a Colonel, commanding the Montana Wing for almost four years. He and Ruth were the first husband/wife team that each served as Wing Commanders in the Civil Air Patrol. A pilot, among his many honors he received the Distinguished Service Medal, as well as the Air Search and Rescue, the Rescue “FIND,” and Lifesaving awards. His professional military education included graduation from the USAF Air Command and Staff College, the Squadron Officer Course and numerous training courses at the USAF Air Force Academy, CO, the Air University at Maxwell AFB, AL, and many other locations. His service to the CAP and the USAF took him, as a member, wing commander, and corporate officer of the Civil Air Patrol, Inc., to dozens of states and travel internationally. As was his wish, Lance’s body has been cremated. A memorial gathering will be held from 4-6 p.m. and a time of sharing will begin at 5:30 p.m., Wednesday, August 8, 2018, at Langkamp Funeral Chapel.

Dr. Lance Jay Edwards passed away peacefully at the MHP Serenity House Hospice in Oskaloosa, Iowa on August 3rd, 2018 at the age of 65. His journey home has come after a long battle with several cancers. Lance was born April 7th, 1953 in Whitefish,... View Obituary & Service Information

The family of Dr. Lance J. Edwards created this Life Tributes page to make it easy to share your memories.