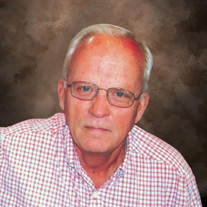 Larry Wagner, 83, of Oskaloosa, passed away Saturday evening, April 2, 2022, at Mahaska Health Hospice Serenity House in Oskaloosa. Larry Lee Wagner, son of Elmer and Rozale (Sypherd) Wagner, was born June 10, 1938, in Oskaloosa, Iowa. He was raised in the What Cheer area, where he attended school. Following his education, Larry began working at What Cheer Clay Products. On October 11, 1959, he married Carol Jean Looney at the Little Brown Church in Nashua, Iowa. He was drafted into the U.S. Army on September 21, 1961, and served until September 21, 1963. After returning from the military, he returned to work at What Cheer Clay Products until it closed in 1965. He then went to work at Mahaska Bottling driving a transport truck; he worked there for 34 years, retiring in 2000. After his retirement, Larry continued to work part-time for the company. Larry and Carol enjoyed traveling, and fishing; Branson, Missouri, and Las Vegas, Nevada were two of their favorite destinations. His family includes two sisters: Roberta Wagner and Mary (Dave) Garrison, both of Des Moines. He was preceded in death by his parents and his wife, Carol, on May 17, 2021. Larry’s sisters would like to recognize and thank the exceptional caregivers that served Larry, first at home, from Shelly Lobbrecht and Corrie Orndorff, and then all the dedicated staff at Mahaska Health and the Hospice Serenity House. Graveside Funeral Services will be held at 10:30 a.m., Thursday, April 7, 2022, at Forest Cemetery in Oskaloosa, with Military Honors by the Oskaloosa Honor Guard. When attending the service, please use the North 11th ST entrance and proceed to the new areas in the east. Visitation will begin at 11 a.m. Wednesday at Langkamp Funeral Chapel & Crematory, the family will greet visitors from 4-6 p.m. Memorials can be made to the Mahaska Health Hospice Foundation for the Hospice Serenity House.

The family of Larry Wagner created this Life Tributes page to make it easy to share your memories.

Send flowers to the Wagner family.