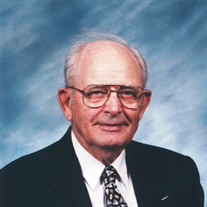 Lawrence Everett, 98, of New Sharon, passed away Friday, June 28, 2019, at the Mahaska Health Hospice Serenity House in Oskaloosa. Lawrence William Everett, the youngest of five children born to Fred and Mildred (Fox) Everett, was born November 2, 1920, at his parents’ farm near Lacey, Iowa. He graduated from Lacey High School in 1938. He worked on the farm until beginning a two-year agriculture program at Iowa State College in 1940. While there he was in ROTC and participated in the Cossacks horse stunt riding team. He enlisted in the U.S. Army Air Corps in September 1942 and was called to active duty February 23, 1943. He was commissioned as a 2nd Lieutenant and served as a bombardier in a B-24. His crew received their B-24 in July at Hamilton Field (San Francisco). They left California and flew to Omaha, then, having telephoned Lawrence’s parents, circled their farm in Iowa twice, and dropped a note that was later found by a neighbor. They continued to Newfoundland, Iceland, and then on to England. He was assigned to the 8th Air Force, 458th Bomber Group, 753rd and then 755th Squadron, lead crew. He flew 29 missions and received the Good Conduct Medal, the Air Medal with 3 clusters, Air Lead Crew Commendation, and the Distinguished Flying Cross (DFC). The DFC was awarded for exceptional performance as Lead Bombardier on many missions over occupied territory and Germany. On one mission he recognized a navigation error of the wing lead bomber and convinced his bomber group commander of the error, resulting in saving that bomber group from intense anti-aircraft fire. Their crew was made the wing lead bomber the following mission, and their squadron dropped 83% of its bombs in a 500 ft. circle on the target. He returned to the U.S. for short assignments after V.E. Day and was inactivated in October 1945. He was promoted to Captain while in the inactive reserves. He enrolled in the Farm Operation B.S. program at Iowa State College in the fall of 1945. He lived at the Alumni Hall residence and was president of the YMCA, where he met Beverly George who was president of the YWCA. Together they developed life-long friendships with other couples brought together through the “Y.” They married June 15, 1947, after Beverly graduated and remained at ISC until Lawrence completed his degree in 1948. They moved to a farm owned by Lawrence’s mother near Lacey, Iowa in spring 1948. They lived on that farm until building a house on a nearby acreage in 1978 where they lived the rest of their lives. They gradually expanded their farming operation with both rented and purchased land. From his uncle Frank Everett he continued a side-business of growing and selling watermelons, cantaloupe and more, operated via roadside stand on Highway 63, with the help of a longtime employee, Don Connor. It was a busy, friendly stopping place for locals looking for produce fresh from the field. Lawrence was active with 4-H, the North Mahaska School Board, Lacey Methodist Church Board, Farm Bureau which included being the Mahaska County Farm Bureau President and a director on the State Farm Bureau Board. He also belonged to the Mahaska County Land Fill Commission, Mahaska County Hospital Board of Trustees (23 years), Ruritan, and the Oskaloosa Chamber of Commerce Agriculture Committee. Supported and encouraged by Lawrence, Beverly gained local, national, and international acclaim for her leadership in women's education, human rights, and environmental preservation. Both were avid supporters of Iowa State University. Lawrence and Beverly welcomed farm visitors from across the globe into their home for weeks and months at a time, including guests from Bangladesh, Argentina, Kenya, the Soviet Union, and India. Lawrence twice visited son Leslie in Africa, including Zaire (DRC) where he assisted in farm equipment repair and swine facility design. His honors included the 4-H Alumni Award and the Junior Chamber of Commerce Young Farmer Award. Lawrence was a people person. He had a ready smile and a twinkle-in-his-eye sense of humor that he shared with everyone. He loved conversation and being with his family whenever possible. He is survived by five children: Leslie Everett (Lois), Falcon Heights, MN; George Everett (Anna), Casselberry, FL ; Rebecca Sinkler (Jack), Montezuma, IA; Gordon Everett (Barbara), Lake Stevens, WA; Floyd Everett, New Sharon, IA; ten grandchildren, fourteen great-grandchildren, three nieces, and three nephews. He was preceded in death by his wife of 53 years, Beverly Beth George Everett, his parents Fred and Mildred Fox Everett, two sisters Esther Everett and Alice Everett Truog and Alice's husband Vyron Truog, two brothers Jerry and Fred Everett, and brother-in-law Neal George and his wife, Helen. Lawrence has left behind many friends and family. Memorial services for Lawrence will be held at 10:30 a.m., Wednesday, July 10, at the Lacey United Methodist Church with Rev. Gordon Everett and Rev. Olivia Fabros officiating. As was Lawrence’s wish, his body has been donated to the University of Iowa Medical School. Burial will be held in Forest Cemetery at a later date. Langkamp Funeral Chapel is handling the arrangements. Memorials can be made to the Lacey United Methodist Church or the North Mahaska Education Foundation.

The family of Lawrence W. Everett created this Life Tributes page to make it easy to share your memories.

Send flowers to the Everett family.