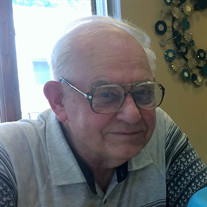 Lee Visser, 82, of Traer, Iowa passed away Friday, September 14, 2018, at Cedar Valley Hospice in Waterloo, Iowa. Lee Eugene Visser, son of Reanus and Opal (Hartness) Visser was born July 5, 1936, in Hamilton, Iowa, near Bussey. He was a 1954 graduate of Albia High School and a 1958 graduate of U.N.I. He married Sharon Kay Woodward on June 15, 1958, at the Congregational Church in Cedar Rapids. That fall, he began his teaching career in Keota, IA, where he taught Physical Education and Driver's Education for two years. He transferred to Traer, Iowa, where he first taught General Science and American History for three years and then taught Driver's Education, Physical Education, and coached football and basketball for 35 years. He retired in 1998. He was a member of the North Tama Teachers Association, the Iowa State Education Association and a lifetime member of the National Education Association. He was also a member of the Ripley United Church of Christ where he served as a deacon and trustee. His hobbies included golf, fishing, card games, and visiting with friends. Lee's family includes his wife, Sharon Visser of Traer, IA; two daughters: Kimberly (Jim) Schultz of Lisbon, IA and Kathy Visser of Cedar Rapids, IA; a son, Tim (Ann) Visser of Centennial, CO; four grandchildren: Jaclyn (Matt) Allain of Dike, IA, Ahren Schultz of Waterloo, IA, and Jason and Rachel Visser of Denver and Centennial, Colorado, respectively; one great-grandchild, Meredith Allain of Dike, IA; two sisters: Carolyn Visser of Dubuque, IA and Sally Hanson of Seattle, WA; two nephews: David and Daniel Hanson, both of Seattle, WA, and a niece, Susan Hanson of Seattle, WA. He was preceded in death by his parents; a sister, Phyllis Smith; brothers-in-law, Larry Smith, and Don Hansen, and mother-in-law, Ruby Woodward. Graveside Funerals Services will be held for Lee at 11 a.m., Thursday, September 20, 2018, at Forest Cemetery with Rev. Robert Goodrich of the First Christian Church officiating. Visitation will begin at 9 a.m., Thursday, at Langkamp Funeral Chapel. A procession will leave the funeral chapel at 10:45 a.m. Langkamp Funeral Chapel has been entrusted with the arrangements. Memorial Contributions may be made to Cedar Valley Hospice House in Waterloo, IA, 319.272.1771 or a charity of your choosing.

The family of Lee E. Visser created this Life Tributes page to make it easy to share your memories.

Send flowers to the Visser family.